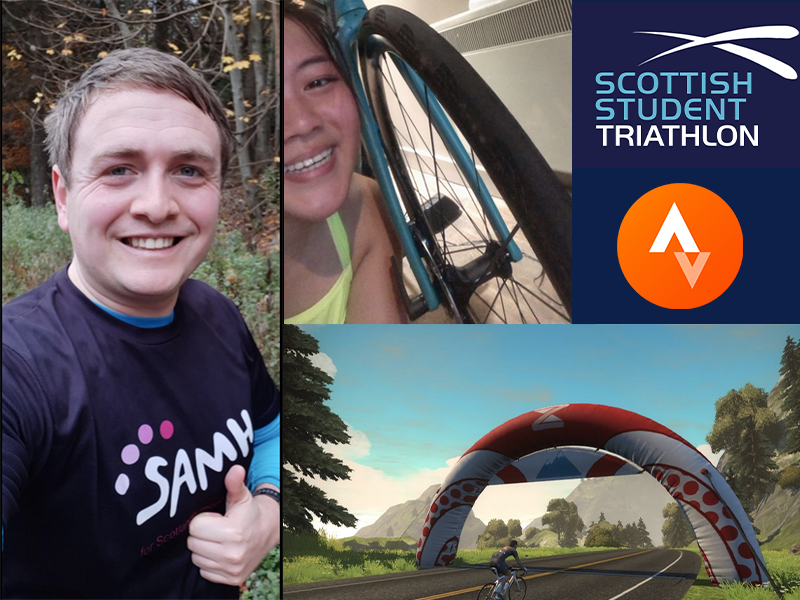 What are the new guidelines? Can we compete? Can we meet up? Important questions where the answer is constantly changing, week by week, region by region. In what has been a frustrating time for sport in general with many competitions and activities on hold, the Scottish Student Triathlon team took matters into their own hands to set up and run their own Virtual Duathlon!

This year, student triathletes from institutions across the country took the race to their own streets (or in some cases their living rooms) to compete in the virtual duathlon. Participants had to complete a 5km, followed by 20km cycle before finishing off with another 3km run.

From Clatto Country Park in Dundee, along the coast at Longniddry to Glasgow Green –  male and female athletes competed against each other, virtually submitting their times to the Strava app.

The women’s race was also hotly contested. Consistency was key for Anja Powell (University of Dundee) who posted top 3 times in all activities to take the win by 22 seconds from her Dundee teammate, Charlene Neo. Charlene was the only athlete to complete the entire event indoors! Nicola Goldmann (University of Glasgow) claimed the third spot on the podium off the back of a strong 5km run.

So far the feedback from the event has been positive with participants enjoying the overall event experience. Thanks to everyone who took part – it was great to have some form of competition taking place, albeit in slightly different circumstances.