Stirling completed a clean sweep of victories in the 15th BUCS/SSS Fife Tournament at The Fairmont (Kittocks), St Andrews last weekend. Both the Stirling men’s and women’s first teams topped the table, alongside Robert Foley who won by 5 shots and Chloe Goadby who trumped her Stirling teammates to finish on top. Read more for the full results and report! 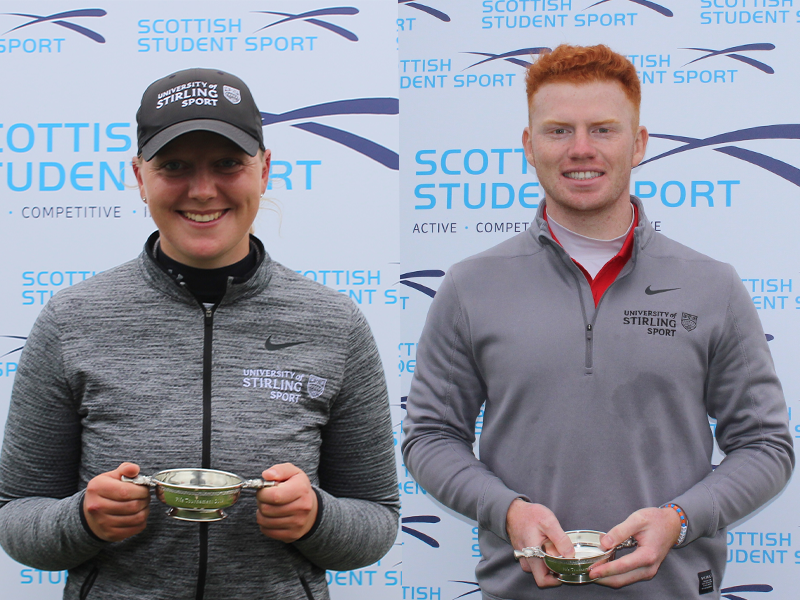 Both the Stirling men’s and women’s first teams topped the table, alongside Robert Foley who won by 5 shots and Chloe Goadby who trumped her Stirling teammates to finish on top.

Benign conditions in St. Andrews set up a final day thriller at the BUCS/SSS Fife Tournament. While the men’s competition saw Robert Foley’s (Stirling) class take him away from the field, the women’s event was a see saw battle amongst the final group right down the 18th, with Chloe Goadby (Stirling) finally sealing the win.

Foley started the day three days back from team mate Greg Hurley but made an immediate inroad with a birdie at the 1st. Hurley was struggling to replicate his consistency of the first two days, bogeys at 3, 4, and 7 saw him out in 39. A second birdie for Foley at 5 saw him take the lead for the first time in the tournament, a lead he wouldn’t relinquish. Further birdies followed at 9, 11, and 12 with the course under siege from the talented Swiss. However, the closing holes of the Kittocks are the hardest on the student tour for a reason and four dropped shots over the final 3 holes left Foley one under for the round, six over for the tournament.

Meanwhile, Hurley had pulled one shot back at the 14th, and although he gave it back on the 16th it looked like a well-deserved 2nd place was in his grasp. Unfortunately, the sting in the Kittocks tail also snared the first year student, an 8 at the last meaning he finished in a credible 3rd place. The runner up was Autumn Trophy winner James Glenn (Durham), who demonstrated his usual solid golf to move up the field. A one over outward 37 was followed by an impressive level par final 9 holes of the tournament to leave him at +11 for the tournament, 5 shots behind Foley. The Stirling men romped to victory in the team event, their +22 score over the three rounds 27 strokes clear of the St Andrews team.

In the women’s competition, the final all-Stirling group of Goadby, Penny Brown, and Louise Duncan were well clear of the field at the start of play and were soon locked into a three-way battle for the title. Duncan led by one on the first tee but was quickly joined at the top as Goadby birdied the 2nd. All three players then birdied the 4th, and when Brown birdied the 5th as well, it was a three-way tie at -2. Duncan dropped back with a bogey at the 6th before a second bogey at the 9th meant that at the turn, Goadby & Brown were tied at the top, Duncan two back.

While many were seeing the start of a two way back nine struggle, Duncan had other ideas as she fired off three straight birdies from 10-12 to move to -3 and the outright lead. The 11th saw Brown drop a shot and so by the time Duncan moved to the top there was a shot between each of the three. A first dropped shot of the day for Goadby at 13 gave Duncan her biggest lead of the round, two ahead with 5 to play. Next it was Brown’s turn to raise her game, back-to-back birdies on 14 & 15 moving her into a share of the lead. Not to be outdone, Goadby picked up a shot on 16 and it was all level again, this time at three under for the tournament.

With organisers beginning preparations for a playoff, the closing holes of the Kittocks course again saw decisive action. A bogey from Duncan on 17 saw her drop one back and with Brown and Goadby just short of the green in 2 on 18 it was finally down to these two. Goadby played a fantastic chip to leave her with a short putt for a birdie and Brown could not match that, eventually finishing at -2 for the tournament, two back from winner Goadby.In the women’s team competition, the Stirling 1st team saw off their 2nd team, a thoroughly impressive -6 for the tournament giving them a 16 stroke win.

The Tour moves back down to England for the last event of the first semester with league play set to begin next week. Full results are available on GolfBox.