The University of Stirling men’s 1st team continued their domination of the Scottish Student Golf Championships Team Matchplay competition, winning the Charles McNeill Trophy for the 7th time in a row, but only after being given a real scare by their second team over the Old Course at Moray GC. 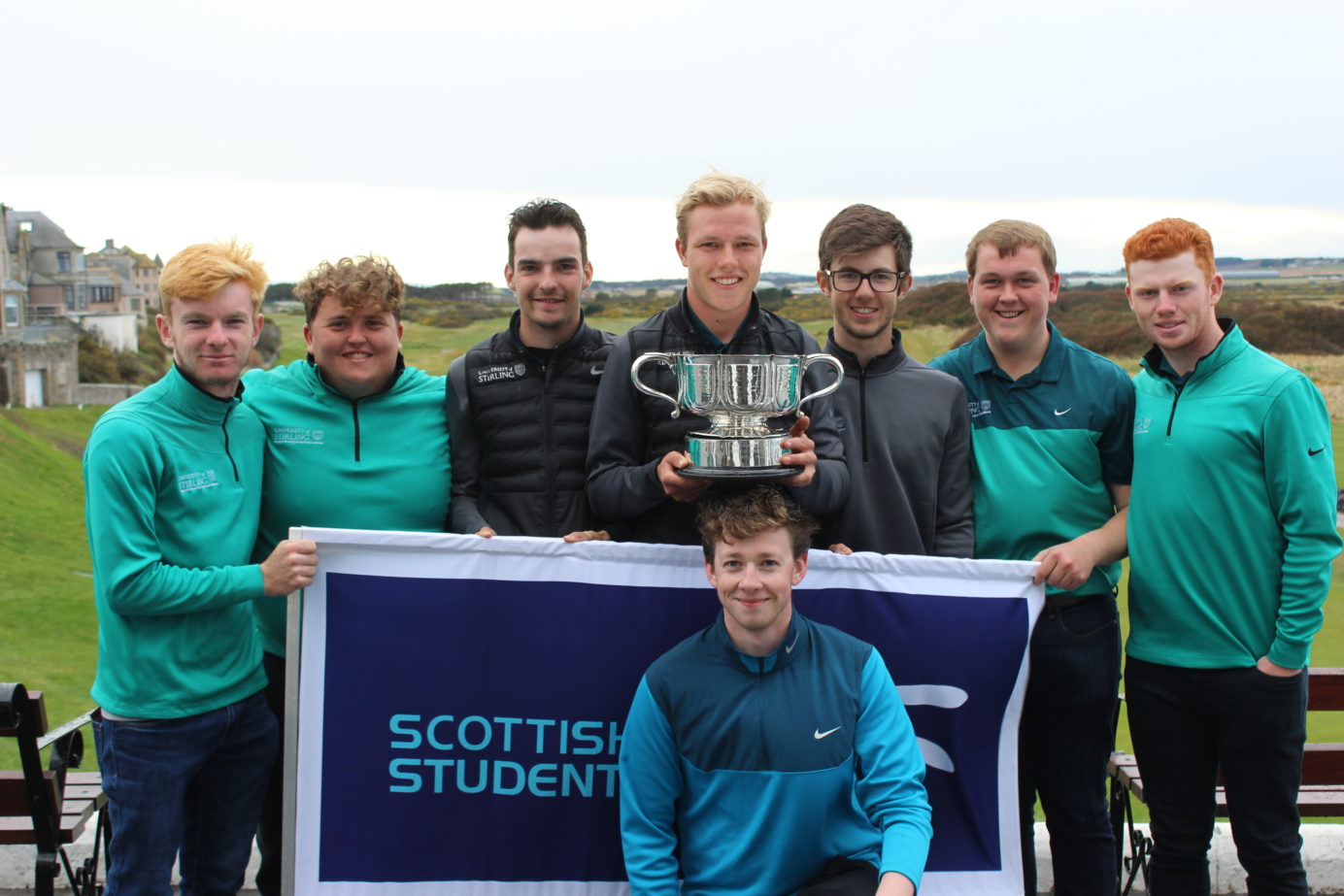 The University of Stirling men’s 1st team continued their domination of the Scottish Student Golf Championships Team Matchplay competition, winning the Charles McNeill Trophy for the 7th time in a row, but only after being given a real scare by their second team over the Old Course at Moray GC.

The morning foursomes were a series of dominant performances as only one match went past the 15th green. Jordan Sundborg and Laird Shepherd (over Jamie Parker and Ben Plaxton) and James Wilson and Robert Foley (over Mark Napier and Matt Fitzsimons) bookended the morning with 5&4 victories while Chris Maclean and Andrew Davidson were almost as dominant in their 4&3 victory over Valerian Huelin and Ellis Hart. The one bright spark for the seconds game with Colin Edgar and David Nagies holding off a fierce comeback from Fergus Bannon and Will Walker, securing a 2&1 victory on the 17th green.

A 3-1 deficit left the second team with it all to do as the eight afternoon singles teed on in deteriorating conditions. That task looked even harder at the turn as Stirling first reached the turn up in 5 matches, square in 2 and only down in the second match. However, Colin Edgar typified the performance of the second team as he reeled off 5 holes in a row from the 10th, turning a one hole deficit into a comprehensive 3&2 victory over Chris Maclean. That was part of a middle order renaissance for the team which, after Jordan Sundborg completed an impressive undefeated tournament with victory over Jack Forgan 6&5, saw the second team reel off 4 points in a row – Edgar’s victory preceded by 18th hole victories for Ben Plaxton over Robert Foley and David Nagies over Fergus Bannon, and followed by Jamie Parker beating Will Walker 2&1. In between those matches James Wilson had beaten Ellis Hart 5&4, leaving the match tied at five points apiece with two matches left on the course.

Match 6 was Andrew Davidson against Mark Napier and it had been nip and tuck throughout the contest, the players turning for home all square. Andrew Davidson turned up the pressure to take a three hole advantage to the 15th hole but back-to-back wins for Napier left Davidson hanging on one up on the 17th tee.

Meanwhile, in the final match, Laird Shepherd had enjoyed a similar 3 hole advantage over Matt Fitzsimons but, after pulling one hole back on the 14th, a wonderful approach from the second team scholarship player to the par 3 15th saw the lead cut to one with three to play. When Shepherd could only find the heavy rough to the left of 16, the concern was clear to see on first team faces. However, a fantastic recovery put the pressure back on Fitzsimmons whose missed putt guaranteed a half with two holes to play.

With Davidson and Napier halfing the 17th in par, that left the first team with a guaranteed playoff and the chance to secure the victory from either of the final matches. In the end it was Laird Shepherd (strokeplay winner earlier in the week) who won the match for the first team when, having missed his birdie putt, Fitzsimons conceded the match. Davidson secured his full point on the 18th green, giving the Stirling first team an 7-5 overall victory and retention of the Charles McNeill Trophy.

With the end of the matchplay tournament, the sun has set on the 95th Scottish Student Golf Championships after a fantastic week of strokeplay and matchplay competition. Thanks go to Moray GC for their incredible hospitality, to our officials and volunteers, and to the players for putting on a great show, highlighting the incredible level of student golf in Scotland. Bring on 2018 when Laird Shepherd will be aiming to become only the 2nd player in history to defend the Jack Allan Trophy and Gemma Batty will look to make history and complete the Smith-Murray Trophy 4-peat.