A day to remember for Stirling University was capped by Sinead Sexton winning the women’s matchplay title over the Old Course at Moray GC after their men secured an all-Stirling final in the men’s team competition. 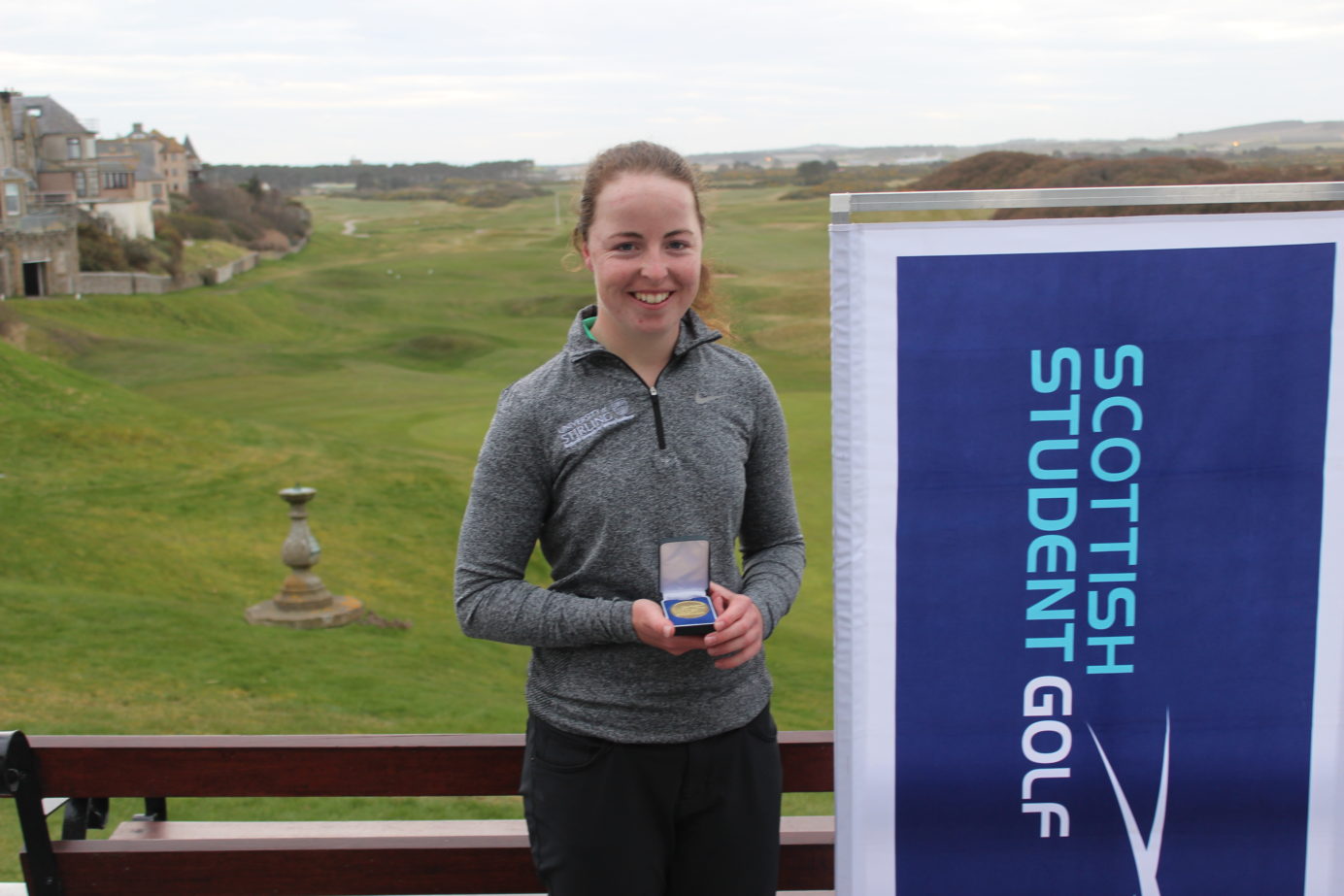 A day to remember for Stirling University was capped by Sinead Sexton winning the women’s matchplay title over the Old Course at Moray GC after their men secured an all-Stirling final in the men’s team competition.

The women played both their semi-final and final, taking on the New Course in the morning before the two finalists battled it out over the Old Course during the afternoon. The morning saw two very close encounters with Jen Saxton (Stirling) pushing number one seed Batty all the way before finally succumbing on the last hole, Batty winning one up. In the other semifinal, St Andrews first year Fern Clark got off to a flying start against the second seeded Sexton, at one stage enjoying a three hole advantage. However, Sinead worked herself back into the match and was able to secure victory on the 17th, but a score of 3&1.

The final, therefore, saw the top two finishers from the strokeplay competition go head to head with Sexton determined to take home a trophy after being pipped to the strokeplay title on Tuesday. While Batty took an early lead, she was never able to gain a substantial advantage, a two hole lead on the 5th vanishing after two Sexton birdies on the 6th and 7th. The match was to and fro from there on in, with Sexton managing to get her nose ahead and take a one hole lead up the final hole. After playing an almost identical shot to the one she produced on Tuesday afternoon, Sexton put the pressure firmly on Batty. When Gemma was unable to get up and down having missed the green to the right on her approach, Sexton was able to roll the ball up to the hole and secure a two hole victory.

In the men’s competition, foursome dominance was enough to secure an all Stirling final after the one’s saw off UHI and the twos battled past St. Andrews. Entering the singles with a 3.5-0.5 deficit, UHI knew they would have to produce something even more special than their quarter final comeback against Strathclyde and while Alistair McNaugton and Riccardo Cellerino were able to secure victories on the 17th green to go with Keiran McCormick’s one hole victory, crushing defeats in the middle of the order by Andrew Davidson (4&3) and Robert Foley (5&4), coupled with an early point for Will Walker (5&4) secured a victory for Stirling that was made more emphatic by Chris Maclean (3&2) and Jordan Sundborg (5&3).

In the second semifinal, Stirling II had secured a precious 3-1 advantage over the course of the morning and St. Andrews knew they would have to have come out of the blocks quickly if they were to have any chance of overturning that deficit. In an attempt to get out to a fast start they flipped their singles lineup with Matt Myers returning to the lineup after missing out on the morning foursomes through sickness, and leading out the team. Unfortunately for St. Andrews, they ran into an inspired singles performance from the Stirling IIs, obviously desperate to have the chance to knock off their illustrious first team and claim the overall title. Victories for Macgregor (4&2) and Innes (1 holes) were never likely to be enough to stem the tide and although Rogan and Anderson both managed to half their matches, victories for David Nagies and Ellis Hart (1 hole), put the Stirling team on the brink and Mark Napier’s 3&2 victory secured the match before captain Colin Edgar was able to put some gloss on the final score, defeating Connor Hansen 3&2.

The final will be played over the Old Course with foursomes commencing from 8.30am.