The University of Edinburgh dominated the SSS Aquathlon Championships with both Edinburgh Students Graeme Scobie and Eilidh Thompson winning the male and female race respectively. Click here for full results and report. 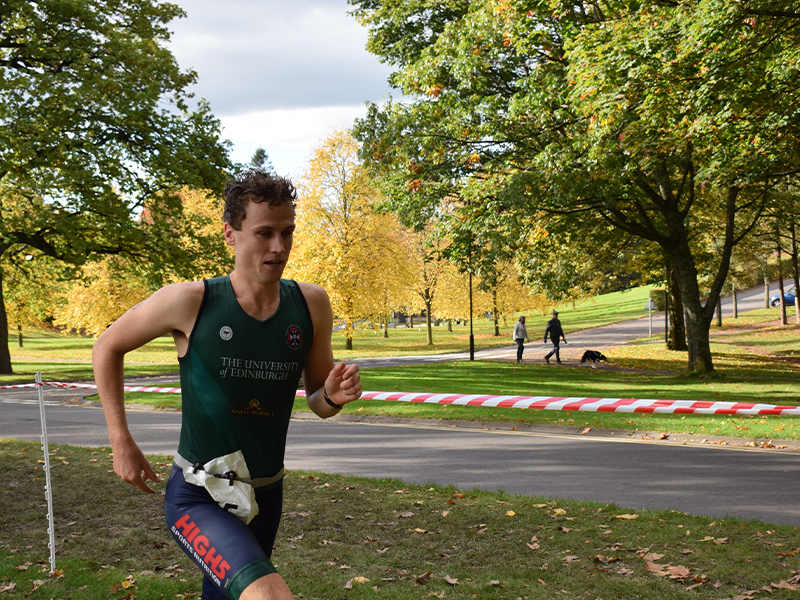 On 20th October a total of 57 students took to the water and road for the 2019 SSS Aquathlon Championship on what was a chilly, but most importantly, dry morning in Stirling.

The race consisted of a 750 metre (30 lengths) swim in the National Swimming Centre at the University of Stirling before a quick transition into running shoes for two laps of the loch (5km) on University campus. Kindly hosted by our friends at Stirling Triathlon Club the student race has grown bigger and better every year with a total of 57 students competing including 34 females and 23 males.

First up was the female race where Edinburgh University students Eilidh Thompson and Mary MacIntosh dominated the race from the outset – making considerable distance between themselves and the rest of the chasing pack. The race was neck and neck right to the finish with only 0.3 seconds splitting the leaders after lane order time adjustments. But it was MacIntosh who edged out Thomson in the end – her quick transitions between disciplines proving pivotal in her road to glory. Third place went down to sprint finish between Jessica Buckett and Anja Powell (both Dundee University) with Buckett edging it with her lunge at the line.

In the male event the slightly lower numbers gave the athletes a bit more space in the water. Edinburgh University dominated this one from the outset too with Graeme Scobie and Callum Roberts starting strongly in the water. The swim strung out the men’s race more than the women’s with a steadier trickle of athletes entering and leaving transition. Scobie backed his fastest swim time with a strong run to secure the win with Roberts holding on to take second place. A blistering run from Csoban Balogh (St. Andrews University) saw him move up the field to take third.

It was fantastic to see such great a turnout at in both events, with multiple new entries and new personal bests for a lot of the field. Well done to everyone involved – we look forward welcoming you to the next event in the Scottish Student Triathlon calendar which is takes places on 12th April in Cupar, Fife.