Bailey prevails in the hail at Scottish Student Golf Championships

The 97th Scottish Student Golf Championships got off to a testing, blustery start at Moray GC today. 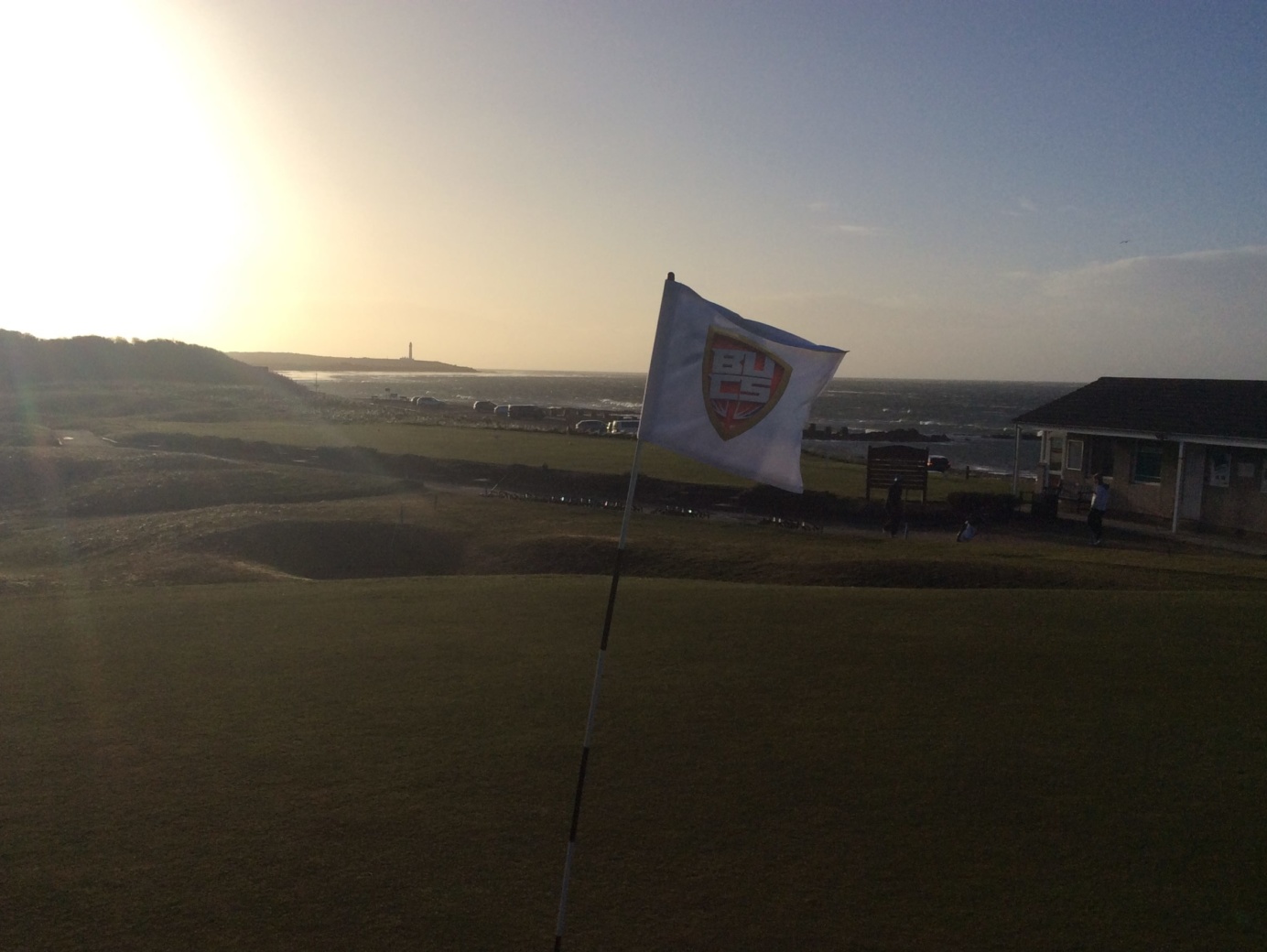 The 97th Scottish Student Golf Championships got off to a testing, blustery start at Moray GC today, as around 130 of the finest College and University players began three days of strokeplay competition.

Play got underway for the men at 0900 at which time the westerly wind was only in the thirties mph. However, by mid-morning the players were contending with very strong gales indeed, making it treacherously difficult to navigate the tight layout of the New Course.

Stirling Uni’s Michael Lawrie held the clubhouse lead at +3 for a spell, weathering a double bogey at the 5th and finishing neatly with birdies at 14 and 17.

Indeed the concept of weather was an ever present concern for the plucky student golfers, with intermittent hailstorms adding yet more piquancy to an already testing day. Play was suspended for a time mid-morning while a brutal hailstorm briefly took hold – and further squally showers were to be a feature of the day. Thankfully though the strong winds would ensure that even the worst conditions were only of a fleeting nature.

Despite the testing conditions there was impressive shooting from Oliver Bailey (Stirling), who birdied the seventh to help him get to the turn in an improbable score of level par. This imperious form was to continue well into the back nine, the highlight of which was a magnificent eagle at the par five fourteenth that came courtesy of a tap in after almost holing out for an albatross.

Oliver might be forgiven for being a little disappointed with three bogeys in the last four holes, as the opportunity for a really special round faded slightly. Nevertheless a +2 round of 72 represented an excellent day’s work and Oliver will be one to watch closely tomorrow afternoon.

The winner of the recent West of Scotland Trophy student event Jordan Sundborg (Stirling) amazingly carded no bogeys at all on route to a +5 round. Having absorbed double bogeys at the 1st, 6th, 12th and 13th he dug in extremely well and finished with three birdies over the last five holes to post 76.

He would finish the day in a tie for fourth with St Andrews’ Peter Kerr, each one shot ahead of James Blyth (St Andrews), who tidily carded fourteen pars on his way to a plus four round of 74.

The Women’s Championship began on the Old Course at mid-day, with the eighteen-strong field each setting out with dreams of success.

In the first group Stirling’s Chloe Goadby got her tournament off to a strong start… In conditions that would trouble even the hardiest campaigners she made it to the turn in +3 before accelerating on the back nine to eventually post a commendable +1 total of 76, thanks to birdies at the 11th and 16th.

Team mate Penny Brown had to tough it out after a difficult start, falling to plus four after the first five holes. However, a birdie 2 at the 6th provided some relief and from there she held firm to recover to a total of +2, featuring back-to-back birdies at 13 and 14.

Meanwhile Jasmine Mackintosh of Robert Gordon University showed great resilience when, having slumped to +7 after the first five holes, she rallied hard to play the following thirteen holes in level par. She would therefore post 82, alongside Emily Laws and just behind Mirren Fraser (both Stirling) – all of whose rounds followed a similar trajectory of gritting teeth after a tough start.

Play continues tomorrow from 0730 as the full field of men and women take to the New Course, harbouring ambitions of making the cut ahead of the final 36 holes on Tuesday. This week represents the last chance for the students to qualify for the BUCS Tour Finals so making the cut takes on extra importance to those close to the cut off mark in the Rob MacPherson Order of Merit

For up to date tournament information please stay tuned to @ScotStuGolf on facebook and for tee times and scores check out GolfBox.