First Round Success in the Women’s Lacrosse Tournament 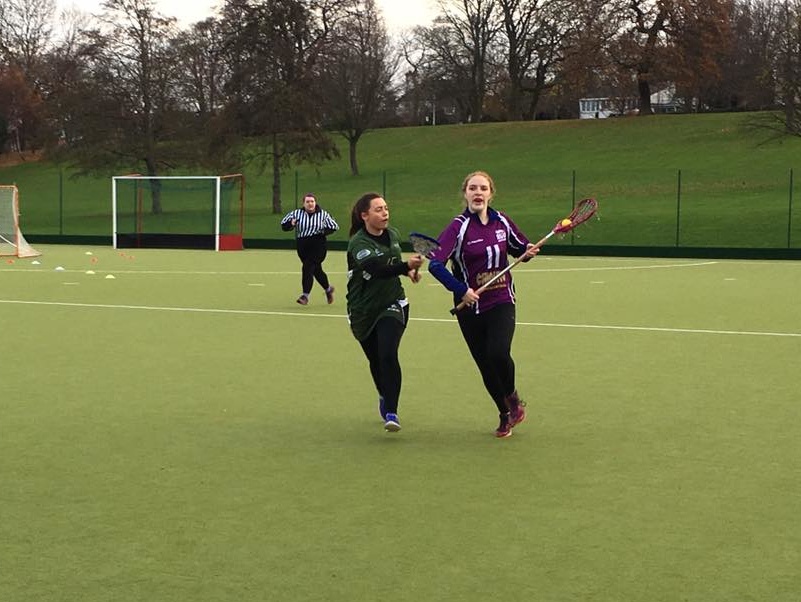 University of Edinburgh, University of Glasgow, University of Stirling and Robert Gordon University all took part in round one of the Women’s Scottish Student Sport Freshers Lacrosse League. This was the first of a three-part series of tournaments  designed to provide female students the opportunity to participate in Lacrosse for the first time!

The day started with a group warm up in which Anna Weaver led to ensure a positive and fun atmosphere was set from the word go! After a few stretches teams were ready to battle it out on the pitch. The first scrimmage started at 1.30 pm in which University of Stirling featured against University of Glasgow it was an evenly contested game which resulted in a 2-1 victory to University of Glasgow.

Game number 4 saw the confident University of Glasgow side come out looking for their 2nd win of the day. They managed to score 3 tactically advanced goals against University of Edinburgh with the help Coach Eve Caldwell’s pearls of wisdom from the side lines!

Heading into the final two games of the day it was fair to say teams from far afield were fascinated by the pink skies that overcast Edinburgh… a good break from competition and an opportunity for the Instagram feeds!

After a tantalising afternoon of Lacrosse it was safe to say everyone was ready to head home and thaw out!

“It was great to see so many beginners getting involved in the game; with some fast and exciting lacrosse being played. Though it took a while, it became obvious the Freshers started to see the benefits of settling their offences. It was clear that throughout the Freshers’ tournament that their Lacrosse IQ was growing and they started to understand the game.”

Anna Weaver (Lacrosse Scotland Events Assistant) specified that it was a pleasure to be a part of such a great day of Lacrosse and congratulated all teams and players for their efforts with some great games being played.

“It was a great opportunity to meet the students as well as having a tournament that allowed for players to try the sport for in some cases the first time, there was a lot of success within each team and individual players, I am looking forward to February where we will see this tournament in action again!”

Round two takes place on Sunday 18th February 2018 at University of St Andrews. The third and final round, where teams will battle it off for the Women’s Freshers Cup will be on Sunday 25th March 2018 at Garscube Sports Complex, Glasgow.

You can view all the pictures from the day by checking the Lacrosse Scotland Facebook page.