Gold for Fraser at end of marathon week 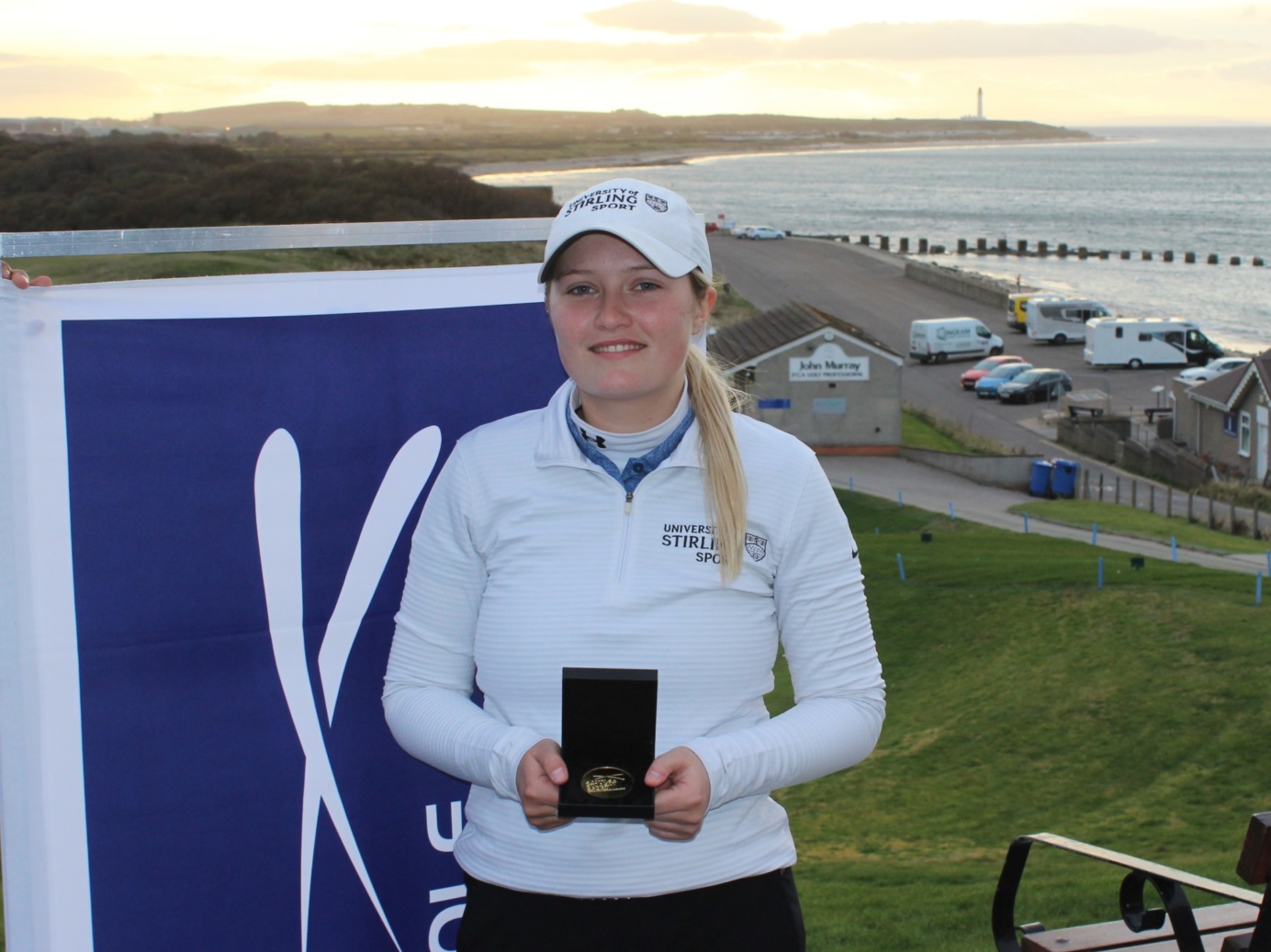 After a very competitive quarter final stage the semi-final line-up had plenty of quality for what it lacked in diversity – with four of the leading players from Stirling University populating an intriguing draw.

Strokeplay champion Chloe Goadby took to the first tee with dreams of a memorable double but would first have to contend with team-mate Mirren Fraser, whose form was hitting a crescendo just at the right time.

A very tight match ensued, with rarely more than a hole between the two players – Fraser responding very well to her underdog tag and trading shot for shot with the always impressive Goadby.

Indeed it would take more than 18 holes to separate the two friends, and with lunchtime shortening by the minute they set off back up the 1st hole in the stiff breeze.

With both players a long way back for their second shots the approaches both narrowly failed to hit the putting surface. Goadby was first to tackle her chip shot and from the right hand side of the green she uncharacteristically failed to make a clean contact and left her shot on the apron of the green.

This momentary blip meant that an up and down for Fraser from just off the front left of the green would be enough for a famous victory. Mirren held her nerve and made a neat and tidy four to seal the match.

She would later go on to face clubmate Nicola Slater, who would need all of her resolve to outlast Emily Laws. Laws, who is rightly seen as something of a matchplay specialist, provided gritty opposition and never gave Slater a moment’s peace over the course of the round – keeping things very close throughout before finally succumbing by a score of 2&1.

After a light lunch the two finalists convened at the first tee of Moray Old to play their last round of a busy week. Indeed Fraser, who unlike Slater had made the cut in the strokeplay earlier this week, would go on to have accumulated 148 holes of competitive golf in five action-packed days!

There was perhaps the occasional sign of fatigue during what was an entertaining but not too low scoring final – although the difficulty rating was enhanced by blustery winds and some very challenging pin positions.

Mirren Fraser started brightly and she went to 2up when she played a tidy approach chip and holed the putt for birdie four at the 3rd.

She was briefly three up after the 5th and again after the 7th, but Nicola made a nice birdie four at the 8th hole… A boomed drive down the middle of the fairway allowed her to have a go in two and a fine second shot allowed her to two putt from 35 feet to get back to within two.

It stayed that way until Mirren had a few difficulties at the 11th, and when her concentration faltered again at the 12th the match was all square.

It was then Nicola’s turn to hit a sticky spot. She couldn’t quite manage to get up and down from the front of the 13th and, after halving the 14th with an excellent birdie, she three putted the 15th to fall to 2 down.

She never gave up however and pars at 16 and 17 were sufficient to bring the match up the iconic last hole, in front of a healthy gathering of her peers.

Both players hit fine tee shots up the middle of the fairway, leaving only short irons in to a tricky back-left pin.

The two approach shots were well struck and on target, but just failed to grab on the late afternoon green and resulted in long putts from behind the hole.

With both leaving their approach putts a handful of feet short Nicola needed to hole her second putt to make Mirren hole out for the win, but as her ball slid past the hole she graciously conceded, giving Mirren Fraser a 2-hole victory and her maiden Scottish Students Title.

This was a popular and well-deserved win for Fraser, who showed great staying power and a fine repertoire of skills to prevail at the end of a marathon week.

She can now turn her thoughts, along with a number of other leading Scottish players, to the BUCS Tour Finals at Lundin GC from 15-17 April. You will be able to follow all the action via www.bucs.org.uk