Innovation at its finest… Despite cancelled competitions due to COVID – this didn’t stop our Scottish Student Cyclists. Swapping the track for the screen, the SSS Cycling Time Trial Championships took place virtually this year. Check out the full report and video! 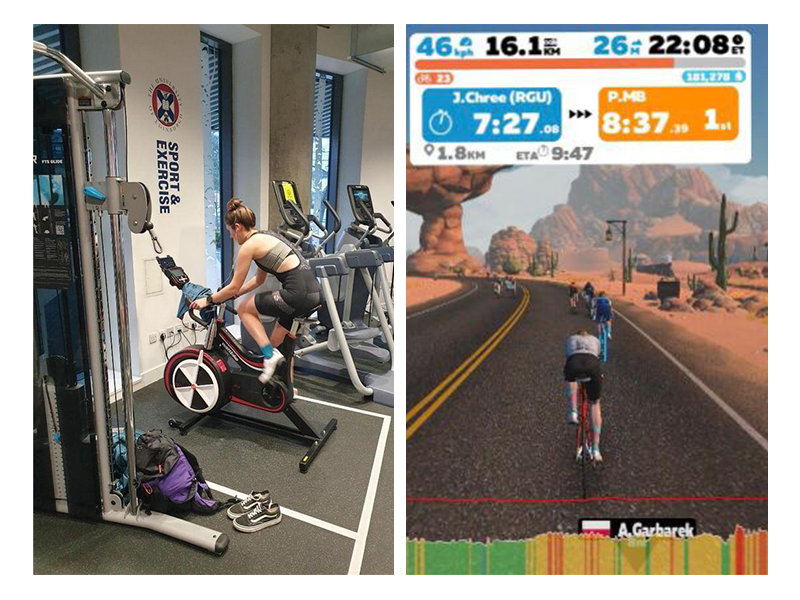 2020 has been a year like no other. Whilst many sports have struggled as a result of the Covid-19 pandemic, cycling has flourished. A record number of students have taken up cycling and embraced life on two wheels. Even though cycling has thrived this year, competition is still heavily restricted. This meant that alternative forms of competition and participation had to be explored.

As a result, the first-ever SSS Virtual Time Trial Championships took place, to round out the first semester. Fortunately, virtual cycling is nothing new. Cycling has a well established virtual network, with multiple platforms and equipment choices available, to make inclusion and participation as dynamic as possible.

The event format was simple – to cover 10 miles on an indoor/stationary bike, in the shortest time possible. We had over 30 participants, from 10 different Scottish institutions compete against the clock. From the Highlands and Islands to the borders participants had 2 weeks to submit attempts, from the comfort of their homes, or in their university or college gyms.

Andrew Johnstone (University of Edinburgh), kicked things off with a strong benchmark in the men’s championship, weeks after his dominant victory in the SSS Virtual Duathlon. Over the next 2 weeks, the times got faster, with the eventual winner, Nico Anelli (Abertay University) going quickest, with a sub 20-minute attempt. Silver was taken by Louis Moore (University of Edinburgh), followed closely by fellow Edinburgh student, Ciaran McSherry. Ciaran submitted 2 times on the final day, to climb into the final medal spot.

The women’s championship came down to the wire. Fiona Lapp (University of Dundee), was sitting in 2nd until the last day, where she made one final attempt to take 20 seconds off her previous best, to secure the gold medal. University of Stirling’s Daisy Barnes took silver, with Arianne Holland (University of Edinburgh) rounding out the medal spots.

🎥 WATCH | We caught up with some of the participants to see what they made of the virtual event.

A special prize was up for grabs as well. SSS Honorary President and ambassador for student sport, Mark Beaumont BEM kindly donated a signed copy of his new book, ‘Endurance: How to Cycle to Further’. Mark also submitted a 10 mile TT time of his own, with the participant who came closest to Mark’s time, receiving the prize. Poppy Freeman (University of St Andrews) came within 2 seconds of Mark’s time, to claim the book.

Many thanks to all of the participants who took part and made the event a success, it was great to see that so many students were eager to compete and represent their institution. Going forward, Scottish Student Cycling will be looking to incorporate more virtual events in the future, to run alongside the normal event programme.