After a long two years the Scottish Student Men’s Football Finals returned today at Oriam, with Heriot-Watt University and the University of Stirling battling it out for the illustrious Queens Park Shield. After a long two years the Scottish Student Football Finals returned today at Oriam, with Heriot-Watt University and the University of Stirling battling it out for the illustrious Men’s Queens Park Shield.

The Queens Park Shield was first awarded in 1922 and this year, 100 years on, we continued the tradition at Oriam. Due to a Covid-19 enforced hiatus players took to the park for the 98th instalment of this historic tournament. After taking the knee to demonstrate Scottish Student Sport’s ongoing commitment to fighting racism and discrimination of any form in sport, the game kicked off at the National Performance Centre. The University of Stirling started well with a strong charge up the field putting the pressure on the Heriot-Watt defence. Stirling’s Jason Jarvis (later named the game’s MVP) scored a blinder just five minutes into the match. He was well rewarded for a great bit of positioning that allowed him to curve the ball past the Heriot-Watt keeper, Matthew Sherry, and hit the net at the bottom right corner.

The game stayed evenly matched for the next twelve minutes until a challenge in the box saw Heriot-Watt University awarded a penalty against the Stirling side. HWU Captain Craig Smith stepped forward and calmly placed the ball past Stirling’s keeper, Ben Fry, to equalise.

The rest of the half played out similarly, with ferocious play from both sides culminating in a level scoreboard heading into halftime. After a brief break the players were back on the park, fired up and ready to provide an exciting second half. After a strong opening from the University of Stirling the Heriot-Watt defence turned it up to eleven, beating back merciless attacks from the Stirling side and countering well. The tempo of the game began to change however and both sides brought on a multitude of subs, looking to find the winning formula that would seal success. Evenly matched going into the 85th minute it was looking like it could have been anyone’s game, however Heriot-Watt’s Campbell Marr was determined to take home the shield. After a phenomenal drive from the Watt and a few small defensive errors from Stirling, a great cross from Daniel Irvine bounced off the Stirling defender and found Marr’s feet, leaving him to seal the deal with a tap into the goal. University of Stirling continued to fight valiantly into extra time but it was not enough to overcome Heriot-Watt’s defence. The match ended with two goals to Heriot-Watt University and one goal to the University of Stirling.

As the final whistle was blown, Heriot Watt Head Coach Bejay Koya charged onto the park with a delighted smile, yells of triumph were heard throughout the Oriam stands and across the pitch – Heriot-Watt University celebrated winning the Queens Park Shield Trophy for the first time since 2008! With more than one hundred and sixty spectators in the stands, the atmosphere was electric and the players could not contain their excitement as SSS Competitions Chair, Chris Sellar, awarded their medals. Well done to runners-up, University of Stirling, who held their heads high and should remain proud to be Queen’s Park Shield finalists.

We would like to extend a huge thank you to our three referees, event volunteers and Oriam staff who made this fantastic celebration of student football happen.

Special thanks to Youth Football Scotland who live-streamed the action which you can watch on the SSS YouTube Channel HERE. You can also check out our photo album from the event on the SSS Facebook Page HERE.

Want more exciting football action? University of Stirling and University of St Andrews battle it out at Oriam on 20th April to win the prestigious SheCanSheWill Cup. You can get your tickets HERE. 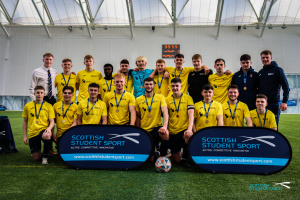 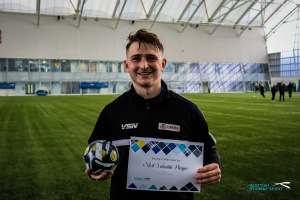