The second day of the 2017 Home Nations saw the busiest day of the schedule as England took on Wales in hockey and football while the Rugby 7s competitions were decided over a round robin afternoon of matches. 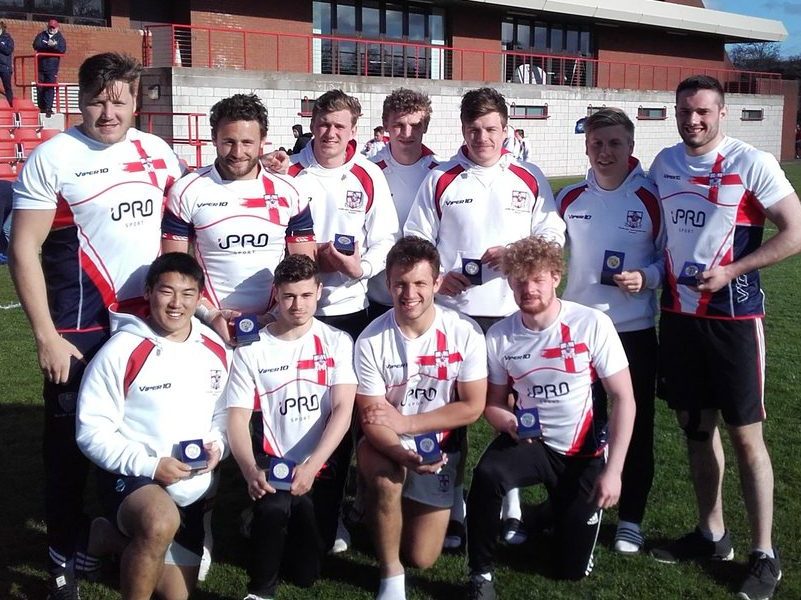 The second day of the 2017 Home Nations saw the busiest day of the schedule as England took on Wales in hockey and football while the Rugby 7s competitions were decided over a round robin afternoon of matches.

After a tough first day of competition, Welsh Universities were looking to bounce back against England, and their first chances came in Men’s Hockey and Women’s Football. The men, having given up a first half lead against Scotland were determined to take something from the game and, despite conceding a late equaliser from a 2-1 lead, held on for the draw. In the tiebreaker penalty shoot out, the first four players from each side all found the net before a saved flick from Wales allowed England to secure the shootout, 5-3. England know that they must win tomorrow or Scotland will take the title.

In the women’s football, the Welsh team came out determined to show their qualities after a tough first day in very windy conditions. A much improved performance, saw them level entering the last half hour, before a penalty and a late headed goal were enough to see England home, 3-1 winners. With both England and Scotland winning their opening games, tomorrow will see a winner-takes-all match at Peffermill for the title of Women’s Football Home Nations Champions.

In the late matches, men’s football, and women’s hockey, it was a reversal of results as the men’s football teams fought out a 0-0 draw, in a keenly contested match that was full of passion but absent of many clear cut chances. In the subsequent shoot out, the England team converted their first four penalties which, coupled with a couple of misses from the Welsh team, saw them take a 4-2 tiebreaker win. Those results mean that the English must win tomorrow if they are to stop Scotland from taking the title.

The women’s hockey match saw an impressive English team ease into a 3-0 lead at halftime and allow Wales were able to pull one goal back from Beth Kenny, they were unable to get any closer to England, the final score seeing England win 3-1. With Wales having defeated Scotland on day one, England need only draw tomorrow to secure the title.

Medals were awarded for the first time in this year’s competition as the men’s and women’s Rugby 7s tournament started and concluded over a keenly contested afternoon. With a number of international players on show, the standard of competition was high and it took some great team performances to secure the respective titles.

In the men’s competition, England were the clear class act in the competition and, after squeezing past Wales 26-21, went on to remain undefeated, scoring 19 tries in their 4 games on the way to the title. Leading their, and all, scorers, with five tries, was Takaya Osaki. After pushing the English close in the first game, Wales split games with Scotland to ensure that they pipped the hosts to the second spot on goal difference. Rob Lind of Scotland and England’s Connor Wilkinson both shone, finishing with four tries apiece, one behind leading scorer Osaki.

The women’s competition was equally keenly fought with one outstanding team, this time the Scotland A team. With early victories over Scotland B and England, they came into their final game against Wales knowing a victory would give them the title. An early blitz of tries saw them ease to a 40 point victory and the 2017 Home Nations Women’s Rugby 7s title. Leading the way in the try scorers chart was Scotland international Rhona Lloyd with seven tries, followed on four by Wales’ Olympian Jasmine Joyce and Megan Gaffney from Scotland.

With the first two competitions complete, the overall table couldn’t be closer with all three teams on 4 points. With 3 points awarded for winning a sport, 2 points for the runner up and a point for 3rd place, it will all come down to tomorrow’s fixtures to decide both the hockey and the football tables but also the overall Champion Home Nation for 2017.

Head down to Peffermill to catch all the action – full schedule and latest information available at www.scottishstudentsport.com/HomeNations17