With over 600 students competing across FIVE different sports, it is safe to say this years Scottish Student Games was bigger and better than ever. Read the full recap including highlights and photos here! 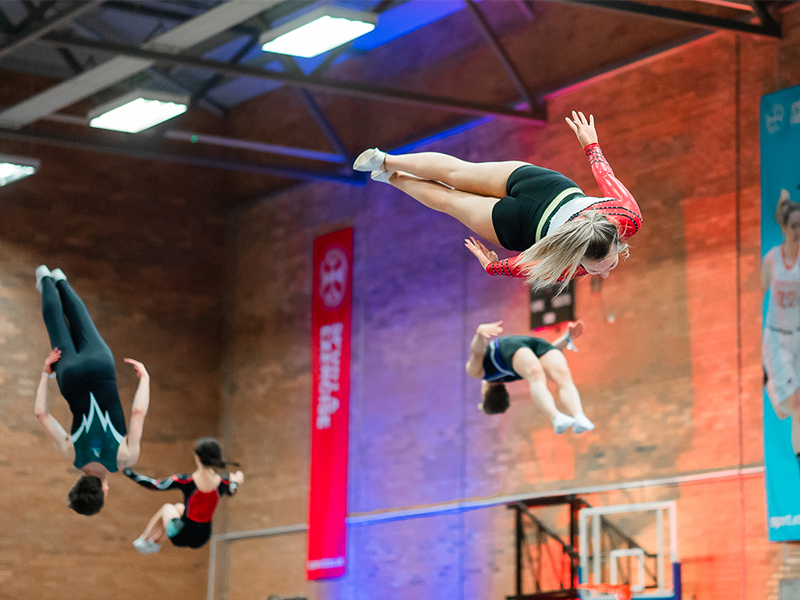 With over 600 students competing across FIVE different sports, it is safe to say this years Scottish Student Games was bigger and better than ever. Students from across the length and breath of Britain travelled to the City of Edinburgh for what was a bumper weekend of activity in the capital. Here is a snapshot of our highlights from the weekend. 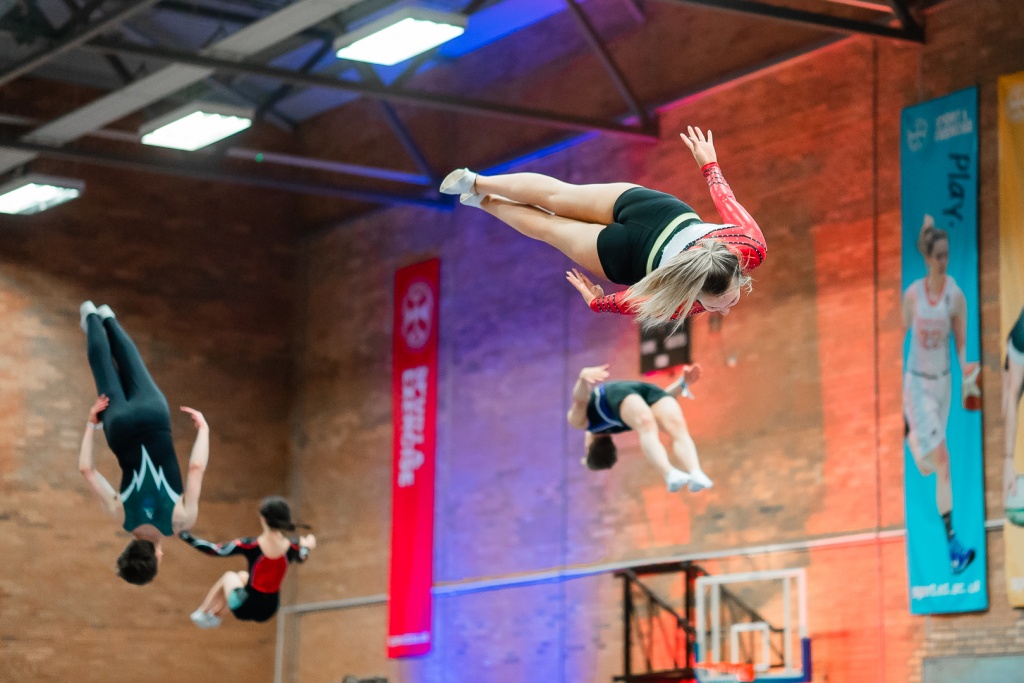 In fitting style the Scottish Student Games started and finished with the headline act. Flips, falls, a whole lot of bouncing and bananas – thank you Fyffes for sponsoring the event – is an accurate description of the Scottish Student Trampoline Open. This year saw over 550 students from 30 institutions competing in various disciplines. Friday allowed for the athletes to get settled, test the trampolines and have an early (ish) night prior to a big two days of competition.

There was excellent talent on show throughout the weekend with Scottish Students securing gold medals in 12 out of the 19 categories. Notable performances included that of Murray Findlay (University of St Andrews), who retained his Pro-Elite Mens title from last year. Ciara Donlevy (Robert Gordon University) also managed to keep a hold of her crown coming out on top in the Pro-Elite Women’s category for the second year in a row. A full list of results can be found here!

📸 You can find the trampolining pictures from the weekend here!

To Eden Rock next, where the Scottish Student Climbing Championships joined forces with the Eden Rock Winter Series for what proved to be a thoroughly competitive day of competition. 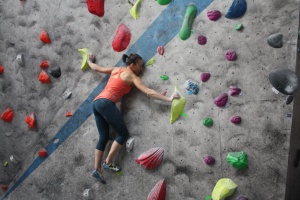 📸 Check out the photos from the event here.

After last years success the Fencing Beginners Open Championship returned to Edinburgh Napier University. The Open saw beginner fencers competing in three different categories; Sabre, Epee and Foil. Aimed at fencers who have less than two years experience behind them, this event provides the perfect opportunity for students to build their competition experience, confidence and meet new people. It was great to see a mixture of beginners from last years competition and first-time-fencers from across the country competing in two full days of competition. 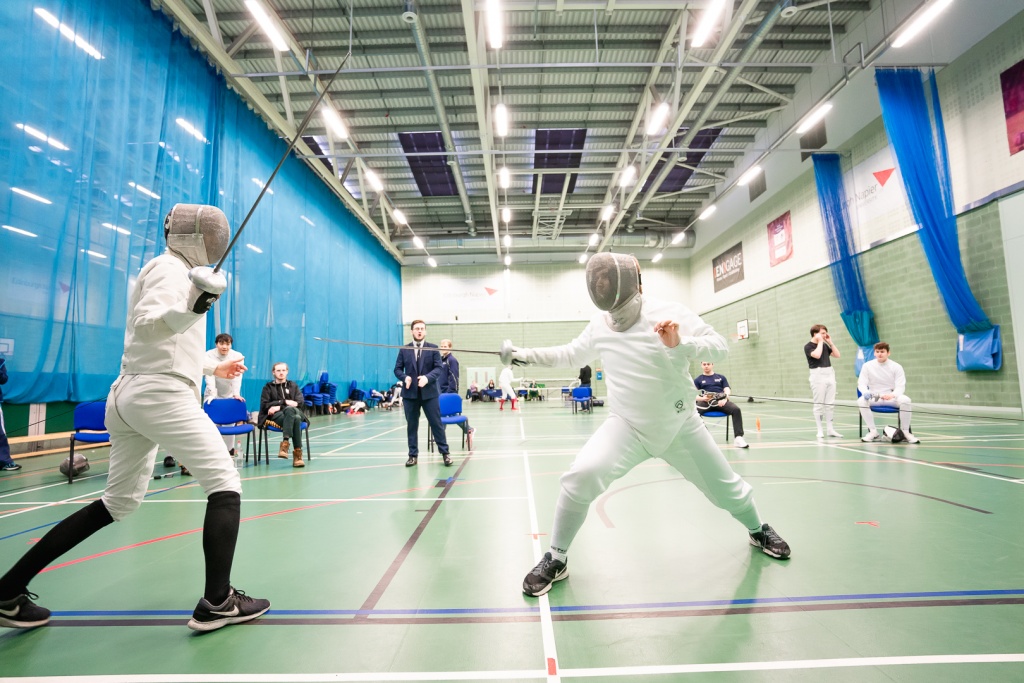 Action from Day 2 of the Fencing Beginners Championships 📸 Calum McGee

Saturday saw competition in the Men’s Foil, Women’s Epee and Women’s Sabre. Heriot-Watt University were in and amongst the medals in the Men’s Foil with Ben Huysamer getting the gold and Bruce McCaig picked up a bronze medal – sandwiched in between them on the podium was Fraser Kenny (Glasgow Caledonian University) who took the silver. In the Women’s Epee it was Strathclyde’s turn to paint the podium maroon with Carolyn Schwab, Lisa Petry and Zsoka Rati taking gold, silver and bronze respectively (Erin Gandia – University of Dundee – shared the bronze medal).  In the Women’s Sabre, Carolyn, Erin and Zsoka were in the medals again – taking a silver and shared bronze respectively. But they came up second best and were beaten by Ella Willsmore of the University of Aberdeen, who upgraded her 2019 bronze medal to a gold one!

Overall, it was a fantastic couple of days of competition, played in an encouraging and competitive atmosphere – giving the athletes some great preparation ahead of the Scottish Student Individual Championships next month.

St Leonard’s welcomed 37 competitors from 9 different institutions on Saturday for a jam-packed day of Scottish Student Table Tennis. In the Women’s singles Xinxin Huo (University of Glasgow) took gold ahead of University of Edinburgh students Mae Ng and Hailey Soo who finished second and third respectively. 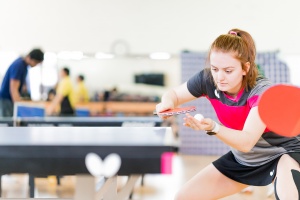 Eye on the ball 📸 Calum McGee

In the Men’s event, with last years champion and Commonwealth Games Athlete Colin Dalgleish recently graduating the playing field was wide open. But it was last years runner up Johannes Lautes (University of Edinburgh) who stepped up to take the gold beating his doubles partner John Hannah (University of Dundee) in the final. The match of day took place in the Double Championship Final where Xinxin Huo and Ren Bingchong (University of Glasgow) pushed the top two seeds Johannes and John to the limits but had to ultimately settle for silver.

Huge thanks to to Richard Yule and the Table Tennis Scotland team for coming to watch some of the action on Saturday afternoon, Tianyi Zhang for taking photos throughout the day, Christina Liu for inputting the scores for matches and last but not least the Edinburgh University Table Tennis Club committee.

📸 Photos from the Table Tennis Championships are online here! 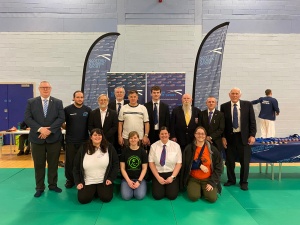 Our wonderful team of Judo officials and volunteers

Craigmount High School played host to the Judo Championships which was organised and overseen by Scottish Student Chair Paul Grady, Judo Scotland Officials and our wonderful volunteers from the Judo community. The Judo Championships was a debut entry into the Scottish Student Games and saw students attending from thirteen institutions – including two new entries; New College Lanarkshire and Edinburgh College.

During warm up, the Judo mats were packed of students of varying ability and experience preparing for the competition before weighing in at the desk. As the Judo community is such a close one,  there is a great amount of support available to the students and volunteers on the day which made for a friendly and warm environment.

Once the individual and team competition was over, it was time for the medals to be presented. Thank you to Judo Scotland’s Head of Business Delivery, Tony Penfold and Edinburgh Bushido Judo Club Head Coach and 5th Dan, Andy Malcolm for presenting the medals to the winning students.

Finally a huge thanks to all our volunteers, judges, officials, venue staff and all the competitors who turned out to make this the biggest student games on record. Final shout out goes to our fabulous sports chairs and their committees for pulling together a sensational show of sport – Joshua Watters (Trampoline), Yubo Rasmussen (Table Tennis),  Paul Grady (Judo), Antony Shek (Fencing) and Morna Baillie & Emily Eadie (Climbing) – you all did a wonderful job.

A fantastic start to the year and a great benchmark for what is to come in the world of student sport in 2020 and beyond.