Saturday 12th of November saw the annual Shinty/Hurling and Camogie challenges take place for the Scottish Student Shinty teams. This year the male and female teams travelled to Northern Ireland to take on a very strong challenge in Queens University Belfast. 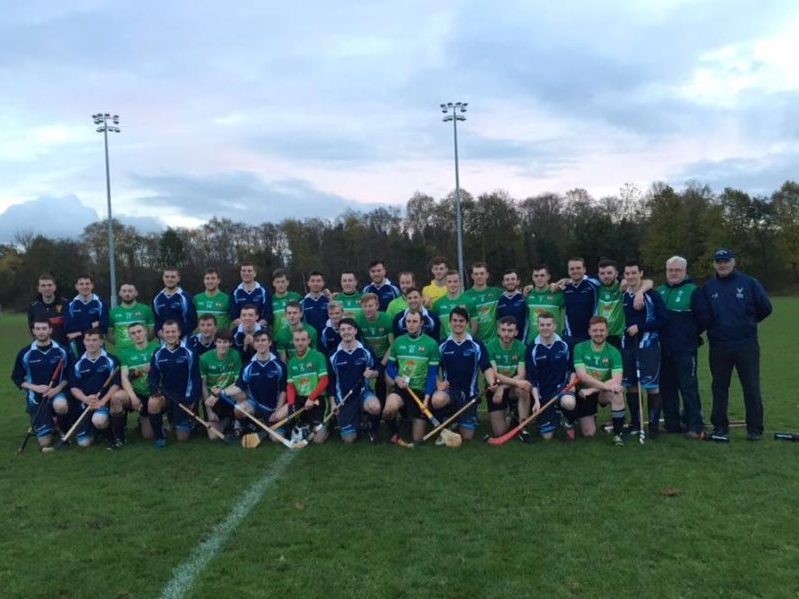 Saturday 12th of November saw the annual Shinty/Hurling and Camogie challenges take place for the Scottish Student Shinty teams. This year the male and female teams travelled to Northern Ireland to take on a very strong challenge in Queens University Belfast.

The women’s teams were the first to take the field; weather and pitch conditions were very favourable so a great contest was anticipated. The match started off at a furious pace with both midfield’s battling hard to take the ascendancy, both Megan Ralph and Rachel McCafferty outstanding for the Scots in this area. Goal chances were difficult to come by but two fine strikes by Rhona MacIntyre and Rachel McCafferty had the Scots leading at half time by 6 points to the Camog’s 1 goal and 1 point. The second half continued to be an evenly matched affair. With Allanah Savage marshalling the Camog’s defence well, the Scots were finding opportunities in front of goal difficult to create. The Irish girls on the other hand were adapting to the hybrid game and were starting to find gaps in the Scot’s defence, a series of fine moves were finished off by goals which had the Camog’s take the lead in the match and the Scot’s pushing hard to find equalisers. The Scot’s eventually ran out of time but not heart and finished the match in good spirits but unfortunately trailing a very good Camogie side by 14 points (4 goals and 2 points) to 6 points (2 goals).

The second match of the day had the Scot’s men’s team take the field against the Queen’s University’s Hurlers, both sides keen to take to the field after watching a fantastic display from both of the Women’s teams with the Scot’s determined to reverse the earlier defeat.

The match again started at a furious pace with the Scot’s doing their best to keep the ball on the ground  and open up the Irish defence but finding the task difficult, a determined back line of hurlers who swarmed round the ball and closed down any potential chances were keeping the Scot’s at bay. The hurlers themselves were making the most of the breakdown of the Scot’s play by launching counter-attacks into the Scot’s defence which was held firm by the excellent performances of Ryan Harrison, Alex Dunnings and Finlay MacMillan. As the match ebbed and flowed, frees by Craig Anderson were keeping the Scot’s ahead of the Irish points from open play, it was evident that only a piece of fantastic play would open up one of the defences. This was supplied by the Scot’s in a move using the full width of the pitch and finished off by an excellent goal by Hamish Anderson. This gave the Scot’s a lift and a second score supplied by Craig Anderson had the Scot’s leading at half time by 10 points (2 goals and 4 points) to 2 points (2 single points). The second half started like the first with the hurlers picking up the pace and determined to breach the Scot’s defence, yet again the Scot’s held firm. The skills being shown by the hurlers were exceptional, in moving the ball quickly from the ground and using their aerial advantage they were a real handful for the Scot’s, with the hurler’s continuing to record single points from open play the Scot’s started to claw their way back into the game and frees from Craig Anderson and a single point from Will Cowie kept the scoreboard ticking over. The pace that the hurler’s had started the second half with started to tail off and the Scot’s took full advantage in goals from Will Cowie, James Pringle and Sandy Elrick. The Hurlers tried to lift themselves again but towards the end of the game further scores by Craig Anderson and a Jack Berg point finished the game off. A final score of Scottish Students 27 to Queen’s 7 points was probably a bit unfair on the true reflection of the day’s play.

Thanks must go to the Queen’s University coaching staff and in particular Joe Baldwin for the Camogs and Sean McGourty for the Hurlers for providing an excellent standard of opposition and fantastic facilities and hospitality for the day.

The Scot’s scorers were: