Student Athletics Returns to the Emirates

The Scottish Student Athletics season got underway with the Opening Match at the Emirates Arena in Glasgow! Read the full report and highlights here! 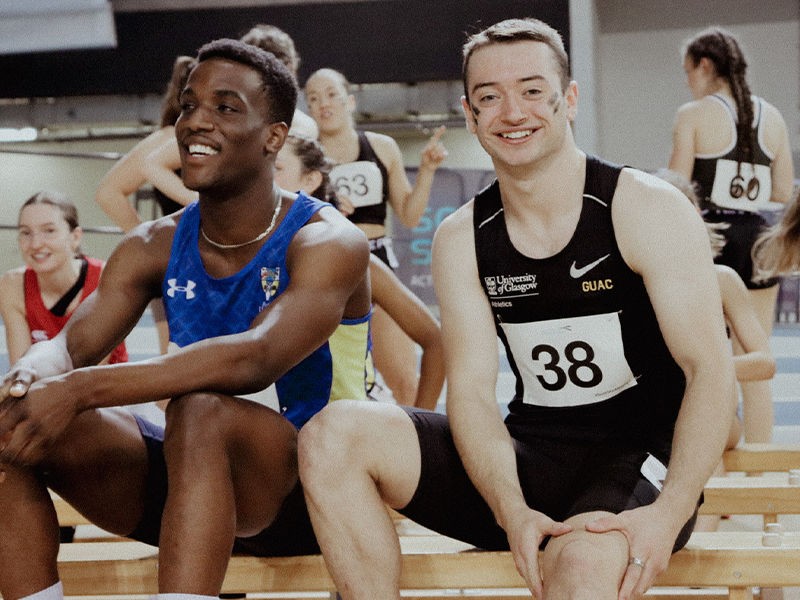 On your marks, get set – GO! The Athletics Opening Match kicked of the Scottish Student Athletics season in fine fashion. Home to some of the most elite events in Scottish Sport, students were delighted to be welcomed back to the Emirates Arena in Glasgow after hosting the event back in 2019.

Aimed at attracting new students to the sport, the Athletics Opening Match gives students the opportunity to take part in a competitive environment potentially for the first time. With this focus, we were thrilled to welcome 213 students to Glasgow to take part – representing 17 different institutions from universities and colleges up and down the country! 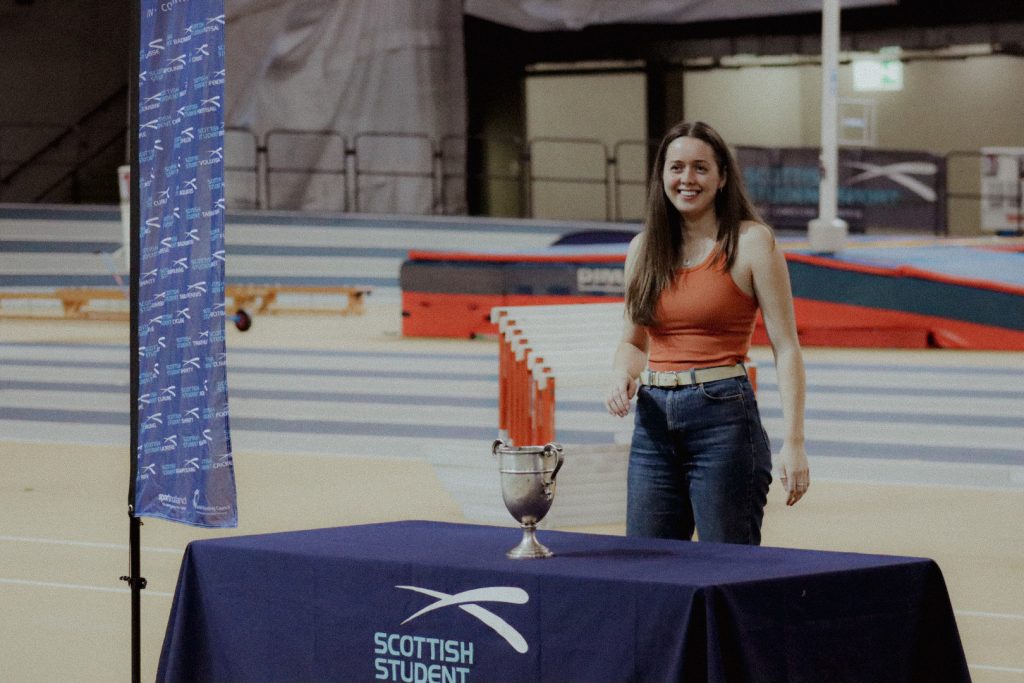 After the declarations, COVID checks and warm-ups were completed, we were underway – with 6 hours of non-stop track and field events taking place.

There were nine events on the field across the men’s and women competitions which featured some standout performances. None more so than Teddy Tchoudja from the University of Strathclyde who broke the Women’s shot putt student record with a throw of 12.66m. This broke the previous record of nine years set by Julia Siart (also of Strathclyde) in 2012 in Kelvin Hall! 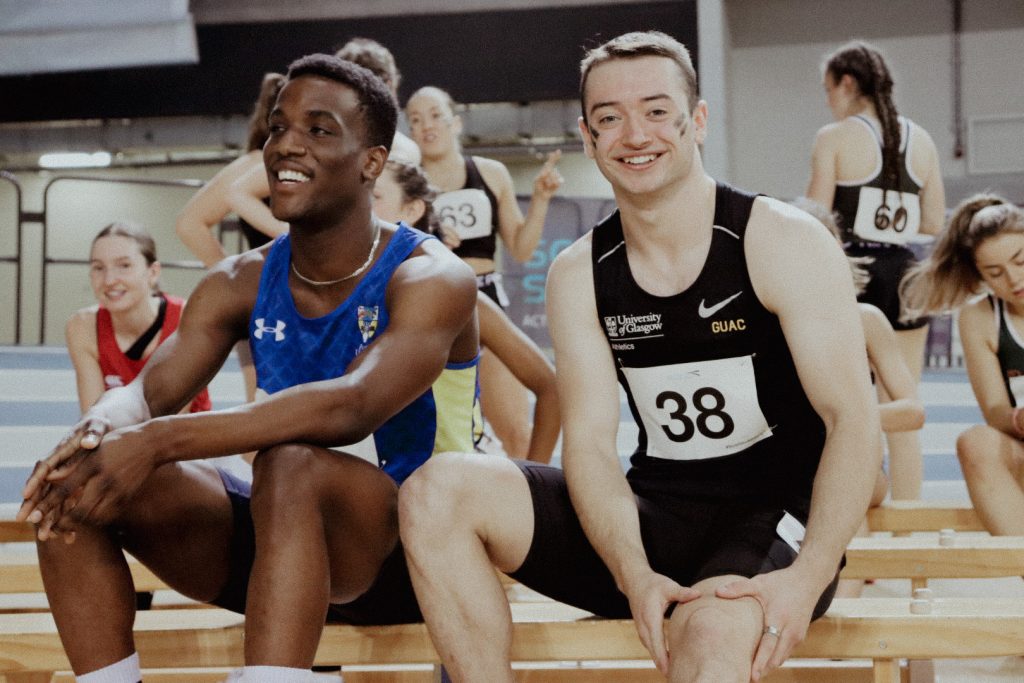 In the sand, there were impressive performances from Laura Buchan (University of Edinburgh) who jumped who won the women’s long jump with a distance of 5.04m. Ally Mitchell (Ayrshire College) claimed the top spot in the men’s event with a jump of 6.20m. Gavin Wilson (Glasgow Caledonian University) cleared 1.95m in the men’s high jump competition – with some fantastic support from the crowd geeing him up for his final attempts. 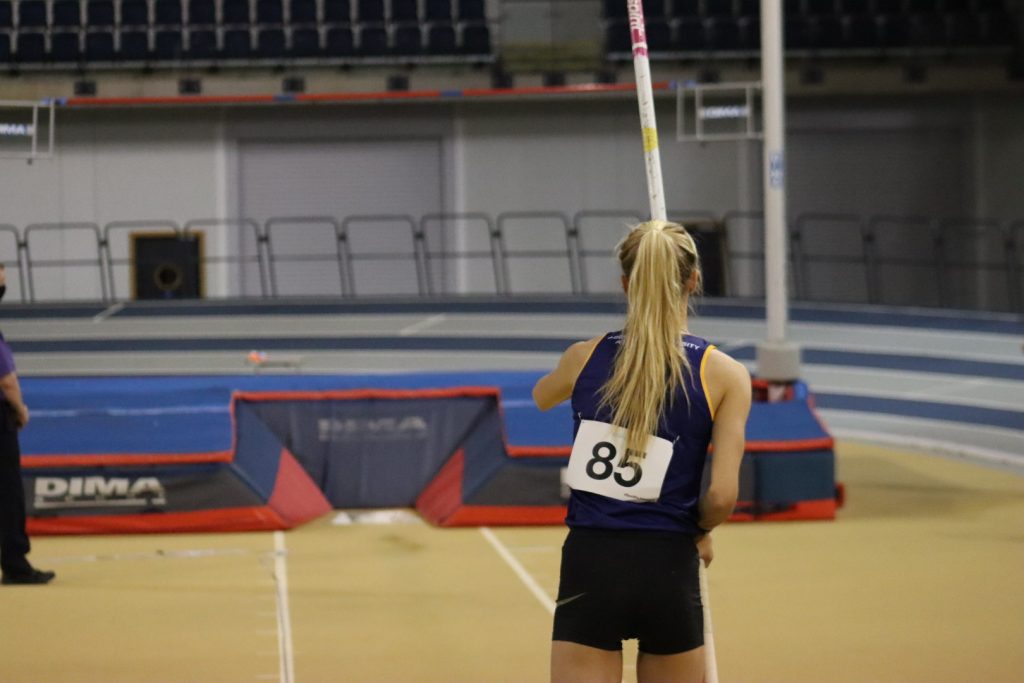 There was plenty of action on the track with something to suit all athletes. For those with fast-twitch fibres the 60m, 60m hurdles and 200m races gave those athletes a chance to show their speed. For the longer races – 400m, 800m, 1500m and 3000m – athletes required not only speed but a tactical approach and the lung capacity to last the duration!

Joda Kokovworho (University of Edinburgh) was the only woman to go sub 8 seconds in the women’s 60m, winning with a time of 7.98 seconds. In the men’s event, Ethan Pottie (University of Glasgow) qualified fastest and won the final with a time of 7.13 seconds. In the 200m, Scott Hannaway (Abertay University) ran a time of 22.7 seconds to claim top spot, with Katie Purves (UWS) running her way to gold in 25.18 seconds in the women’s event.

Luke Davidson was flying the flag for the University of the Highlands and Islands – and he did them proud! Luke won the men’s 3000m with a time of 8 minutes 41 seconds – 15 seconds clear of second place! Representing the University of Stirling, students Jack Muir and Mark Carberry won the 800m and 1500m respectively.

The final events of the day were the 4×200 and 4×400 metre relays – always a spectacle at any athletics event. Abertay (Enoch Aderibigbe, Scott Hannaway, Fraser Kelly, Bobby Laurenson) pipped Glasgow to gold in the men’s 4x200m relay, before Glasgow got their revenge in the 4x400m event. The Glasgow team of Andrew Baird, Videsh Weerakkody, Gordon Manson and Callum Letham ran their way to glory.

The Glasgow women’s team consisting of Beth Aitken, Rachel Taylor, Anna Dalglish and Eve Tulloch backed up the men’s win, with a gold of their own in the same event with a time of 4:33.80. In the women’s 4×200 the University of Edinburgh ‘B’ (Chloe Louise Cheyne, Ellie Woodall, Joda Kokovworho and Liberty Hughes) claimed the top spot, capping off a successful day for Edinburgh University students. 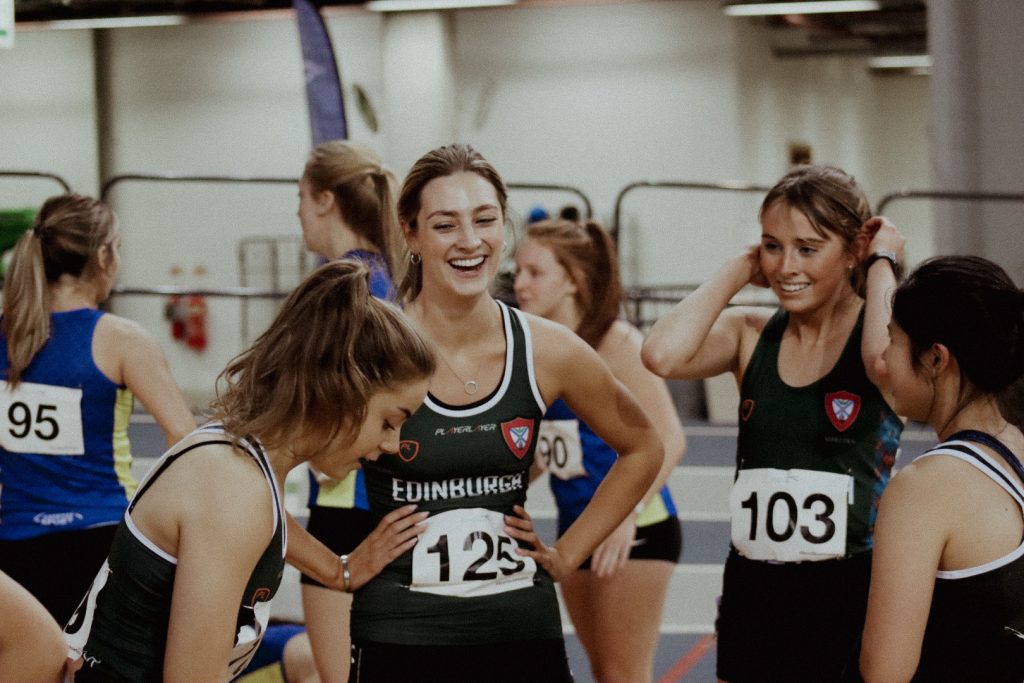 Impressive wins from Ben Knowles (men’s 400m), Daniel McFarlane (60m hurdles), Merce Sanchez Oller (women’s 1500m) Annie Bell (women’s 400m) all helped the University of Edinburgh to claim best overall institution on the day and walk away with the top prize of the Appleton Trophy. Congratulations to Edinburgh on winning the trophy for their first time in 10 years – fending off some tough competition from Glasgow in second and Stirling who finished third. Full Appleton Trophy Results can be found here! 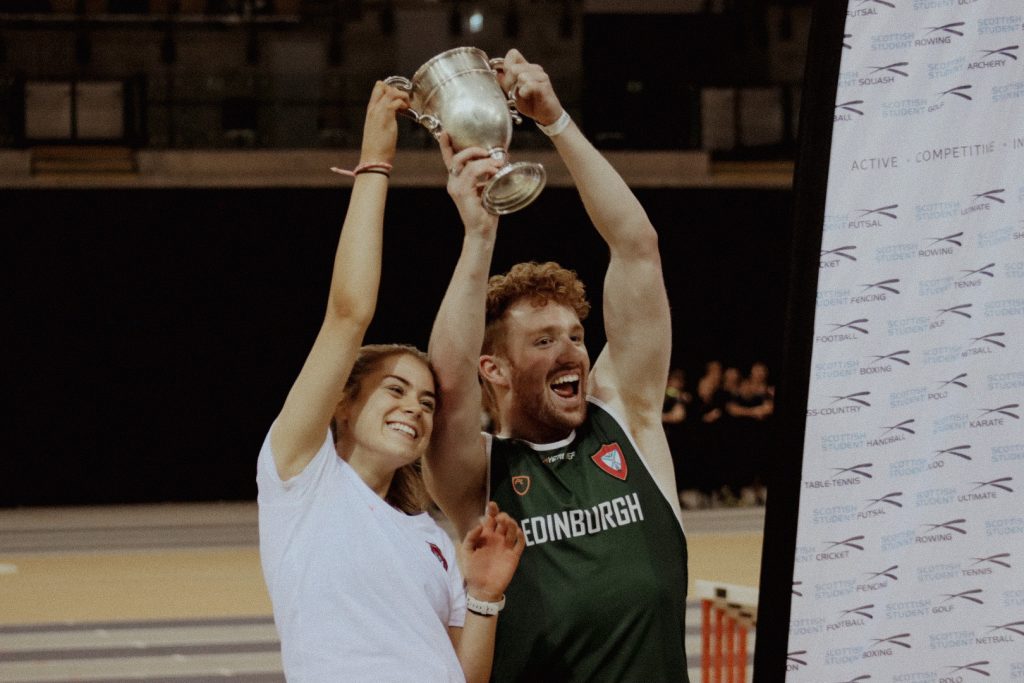 Overall, it was a fantastic day out at the Emirates and it was great to see so many students back competing again with a smile on their face. Special mention to all the officials who helped out on the day – these events could simply not run without you! Thanks to Scottish Athletics, Burnside First Aid Ltd for providing first aid and medical assistance whenever called upon, the Emirates Arena for hosting us and to all our volunteers who helped out on the day with scoring, registration, photography and everything in between.

Massive shoutout to all our officials, our @ScoStuAthletics development group and the rest of the volunteers who helped out today!

These events simply couldn’t run without you! 🙌🏽💙 pic.twitter.com/dkoQPg0C1F

Did you enjoy the event? Let us know what you thought of it and how we could make it better for next time! Fill out the Feedback survey!

Full results can be found on the event page here!