Stirling University Cycling Club were once again our hosts for the Scottish Student Cycling Hill Climb Championships, taking us back to the annual slopes of suffering to the National Wallace Monument to kick-start the 2022-23 season. 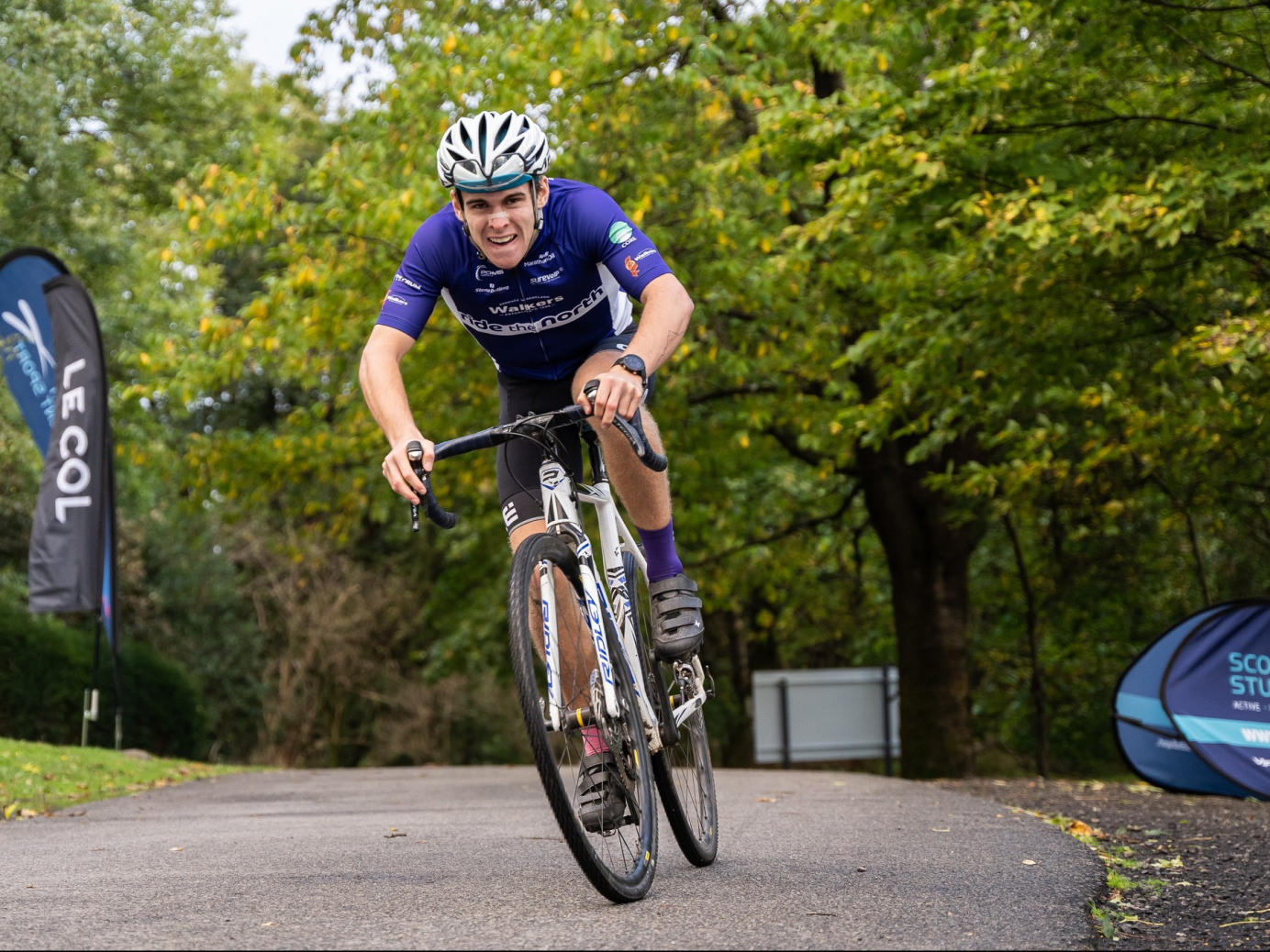 Stirling University Cycling Club were once again our hosts for the Scottish Student Cycling Hill Climb Championships, taking us back to the annual slopes of suffering to the National Wallace Monument to kick-start the 2022-23 season. This year, the exciting new addition of Le Col sponsorship provided even greater stakes, with superb prizes up for grabs.

A total of 46 riders – 31 male, 15 female – took on the brutal 14% average gradients over a course of (only) 500m! The course however was also wet from earlier rain showers, so the riders would have to contend with spinning wheels as they lost grip on the steepest gradients.  This would be a short, but gruelling, effort from start to finish once again – but the riders knew what they were getting themselves in for.

After their warm up and a recce of the climb, the riders started queuing for their chance at glory – though they would be forgiven for thinking the podium would be taken from the start due to the high calibre of riders in the field. First up was the favourite for the day: former Junior MTB XC Champion and last year’s champion (with an excellent time of 1:32), Charlie Aldridge (University of Edinburgh)! Could he set a winning time from the start? It looked likely as he set a ferocious pace to cross the finish line, for the second year running, with a time of 1:32!

Not long after, University of Aberdeen’s Sam Carrotte became the second person to achieve a sub-1:40 time on the day, eventually taking home 4th as the highest placed rider not from University of Edinburgh.

It was Louis Moore (University of Edinburgh), fresh from his first National-B race win the previous weekend that provided what many would call the ‘ride of the day’.  He took 5 seconds off of his time from last year to cross the line in a blistering 1:30 to take a decisive victory.  University of Edinburgh showed they had depth in leg-power as they also claimed 2nd and 3rd on the Men’s podium: Charlie Aldridge pipped for second and Angus Toms in 3rd.

University of Stirling started proceedings in the women’s event, with Charli Alston setting a superb time of 2:28 and taking 3 seconds off of her bronze medal-worthy time from last year. Unfortunately it wasn’t quite enough to get her onto the podium this year, however, as University of Edinburgh demonstrated breadth as well as depth, taking two of the 3 top positions and knocking Charli in to 4th. Amelia Tyler (University of Edinburgh) took 2nd place in a time of 2:16, whilst her team mate, Anna McGorum, claimed 3rd place with a time of 2:22 – a fantastic achievement given it was her first race in over a year!

The gold medal and second clean-sweep was not destined for University of Edinburgh this time as GB rider and 2x British MTB XC Champion, Elena McGorum (University of Dundee) stormed the climb. Elena flew up the hill with a sensational time of 2:13 to take the top position.

Some fantastic riding by the other women’s riders saw the top 10 rounded out with 2 riders from the Universities of Dundee, Edinburgh, St Andrews and Stirling, all within 20 seconds of each other. It was particularly exciting to have 18 female riders in the event – with entries growing over time from just 5 women entered in to the 2018 competition!

Well done to all riders on the day. The route, though short, it is a difficult climb so it’s a brilliant achievement to get to finish it, regardless of time.  Congratulations to the clubs claiming well-earned points in the SS Cycling Series. With 16 riders competing and taking 5 of the 6 medals on offer, University of Edinburgh take the lead in 138 points.  Second place is the University of Stirling with 68 points, whilst the University of Dundee is currently in 3rd place with 42 points.

It’s still very much all to play for with another 4 events in the season. As 5 points are earned per entry from each institution, not just for places, we look forward to seeing student cyclists out in force: more people, more points!  Keep an eye on our socials for details about our upcoming Cyclo-Cross Championships.

Finally, a massive thank you to President of Stirling University Cycling Club, Daisy Barnes, for making this happen as event organiser.  We are ever grateful to event sponsors, Le Col and Root Cycles for providing some incredible prizes for our riders.  Many thanks to all volunteers who helped on the day, as well as all our wonderful spectators who created a brilliant, encouraging atmosphere for all those racing!