Records were toppled last weekend as the Student Athletics Championship returned to a sunny Grangemouth Stadium. Records were toppled at the Student Athletics Championship returned to a sunny Grangemouth Stadium after a long 3 year break. Students were delighted to be back competing in the Outdoor Championships, with more than two hundred and twenty entrants representing Colleges and Universities across Scotland.

Arriving with smiles on their faces, their mascots and a bunch of team spirit the stadium came alive once more with student energy.

It was a record-breaking day all round, with five records broken across the track and field! In the Women’s 100m Hurdles Katie Purves of the University of the West of Scotland (UWS) smashed her own record from the competition with a blistering time of 14.19s. Following soon after Roisin Harrison (University of Aberdeen), ran an incredible 24.06 in the Women’s 200m, beating Katie Purves (UWS) and Charlotte Bevan (Robert Gordon University, RGU) at the line. The third track record break came from University of Stirling’s, Sarah Tait, who shattered the Woman’s 3000m Steeplechase, taking victory from Margarita Radeva (Aberdeen) and Sarah Gilhooley (RGU) and breaking a record that has stood for 8 years. In the field events, Claire McGarvey from University of Glasgow broke the Women’s high jump with an excellent 1.75m jump! Meanwhile, Alice Baxendale broke a 6 year old record in the Women’s Discus with a massive 42.59m. 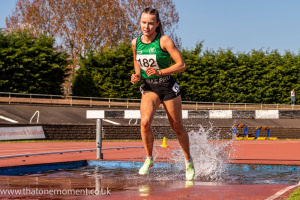 Students from up and down the field showcased student athletics at its very best, and a true festival atmosphere was felt by all. It was particularly excellent to see multiple college students participate – and especially on the podium! Finlay Waugh (City of Glasgow College) claimed gold in the Men’s 200m running a phenomenal 21.72. Meanwhile Ben Sandilands from Scottish Rural College topped the field in the Men’s 1500m by over 2 seconds. It was a great day for Alexander Mackay (UHI) who took double gold in the Men’s Discus and Men’s Shot Putt, firmly clear of his competitors in both field events.

The stands came alive as students raced the relays to seal off the day, squeezing in one last opportunity to earn some overall event points for their institution. It was a strong showing in the afternoon session which sealed the deal, however, and rapturous excitement could be heard across Grangemouth Stadium as the University of Glasgow took home the John Innes Memorial Trophy for the 9th year in a row!

We’d like to extend a huge thank you to Scottish Athletics and the volunteers that made this event possible, as well as the students brought such a competitive energy with them.

Got 5 minutes to spare? Please take the time to complete our Feedback Survey to tell us about your experiences of the day!