After a delayed start due to snow, the final round of the 11th SSS/BUCS Dondonald Tournament finished under blue skies with Chloe Goadby (Stirling) and James Wilson (Stirling) taking home the individual honours. 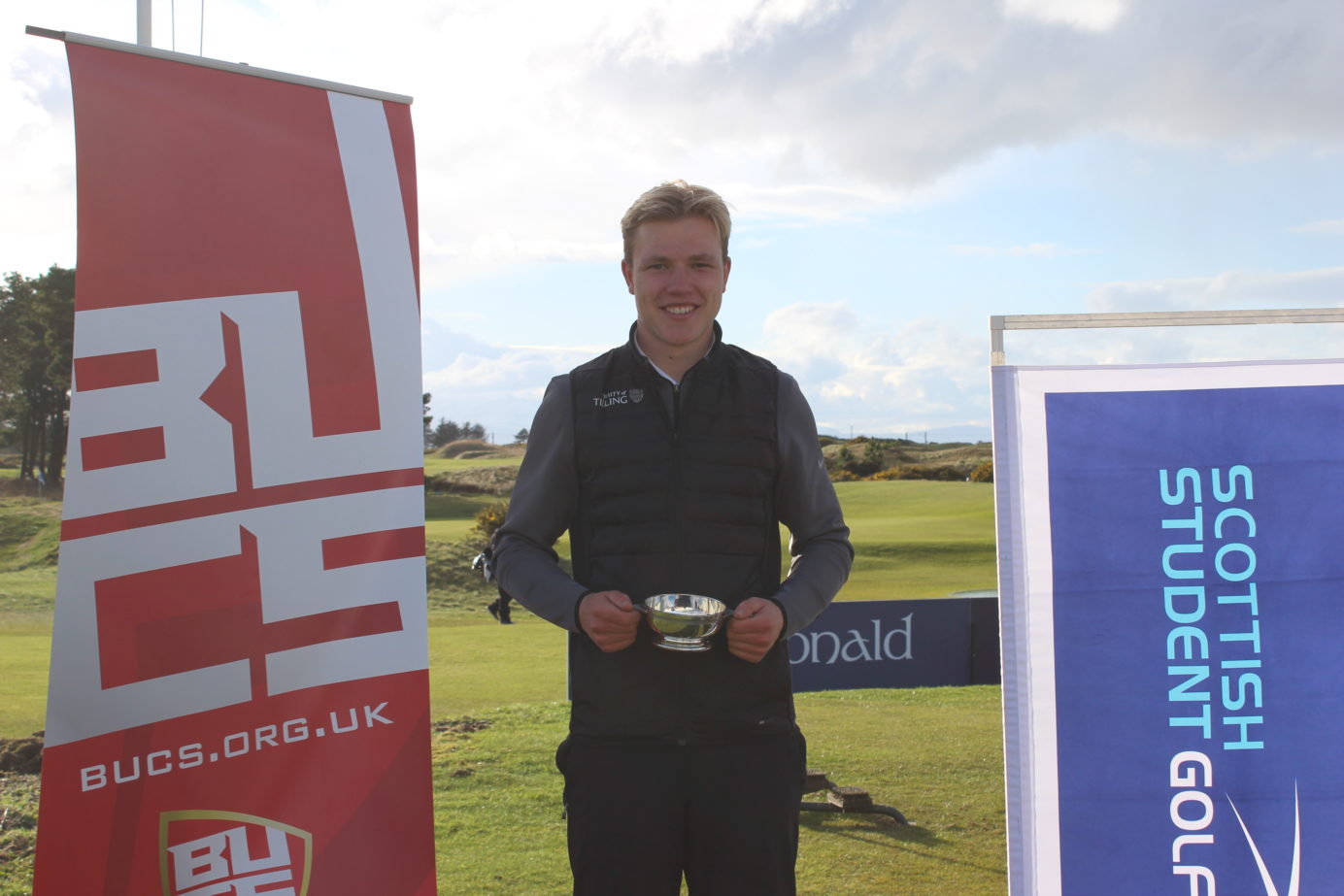 After a delayed start due to snow, the final round of the 11th SSS/BUCS Dondonald Tournament finished under blue skies with Chloe Goadby (Stirling) and James Wilson (Stirling) taking home the individual honours.

The women’s competition had been a close affair over the first two days with any of the final grouping of Goadby, Gemma Batty (Stirling), and Emma Hale (GCU) in position to take the title. However, it was Goadby who took the competition away from the field, adding a 73 to the previous day’s 74 to finish at ten over, six clear of Batty. Jen Saxton (Stirling) shot a closing 81, which was enough to secure 3rd place on countback from Hale, completing a sweep of the podium places for Stirling. It was no surprise that Stirling also took home the team competition, the two round total of 304 by Goady, Batty, and Sinead Sexton comfortably beating St Andrews into second.

The men’s competition was always likely to be a shootout with a host of previous Tour event winners queuing up behind overnight leader Colin Edgar (Stirling). However, before getting to the business end of the competition a mention must go to Daniel Lloyd (Central Lancashire) who went out in the first group, and the worst of the weather, and shot a day’s best 75 to earn himself 18th place and some valuable points towards Tour Finals. At the front, however, the day developed into one of the most exciting in recent memory with a 4 way tie at the top of the leaderboard at one stage of the back nine, and at least 8 players who were at one point or another within a shot of the lead. At the end of the early starters, Peter Kerr (St Andrews) set the clubhouse target, a fine 75 leaving him on 12 over par. Robert Foley (Stirling) followed him in at 12 over, and as players dropped shots over the back nine, it looked for a while as though that may yet challenge for the title. However, fine back nines from Chris Maclean (Stirling) and Wilson meant that with the last group on the 18th, the clubhouse lead was +10. When Edgar couldn’t manage the par needed to match that, Maclean and Wilson set off down the first in a playoff. In the end, one hole was all that was needed as Maclean missed his par putt, leaving Wilson the chance to seal the title, which he did, with Matthew Myers (St Andrews) finishing 3rd, one shot back. In the team competition, St Andrews quartet of Bjorn Bojesen, Matthew Myers, George Burns, and Peter Kerr pipped Stirling to the title.

Thanks must go the Dundonald Links for their hospitality, to official Colin Lamont, and volunteers James and Craig for delivering the event.