The first-ever Basketball Trophy Finals have been and gone – what a competition it has been! Read our competition overview and report from the finals day itself! 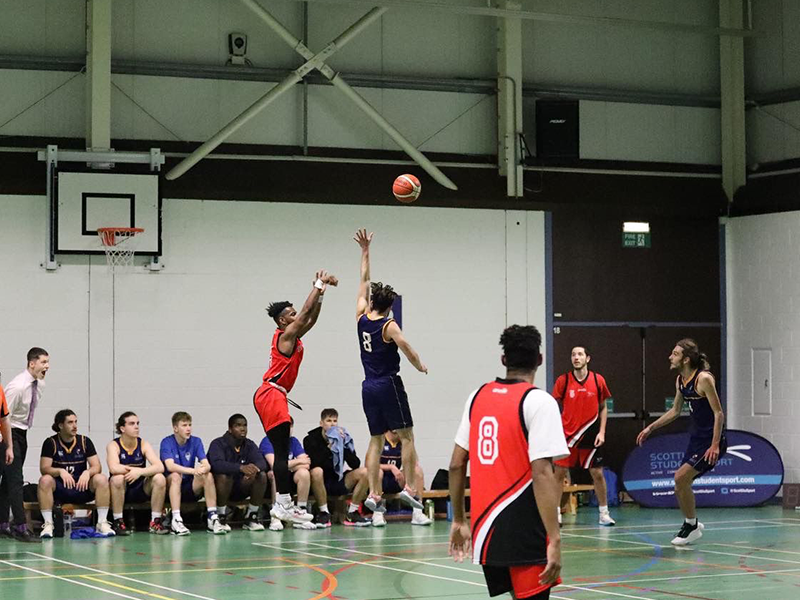 Twenty-five teams started their journey in the opening rounds of the first-ever Scottish Student Basketball Trophy. Twenty-five potential new National Champions began their journey to the Institute of Sport and Exercise in a brand new competition organised and brought to the season by the Scottish Student Basketball Development Group. Despite having limited spectator numbers in the venue, we were delighted to have the finals live-streamed on the SSS YouTube Channel, which saw over 1000 views across both finals – you can rewatch the action below!

The Road to the Finals

The beauty of this competition was there were no restrictions on teams entering. The tournament featured teams from all five tiers in student basketball, allowing for plenty of cup shocks and underdog stories from round one!

In the women’s competition, RGU’s story encapsulates the magic of this brand new competition. The tier 3 side started their campaign with a victory over city rivals Aberdeen in the preliminary round. Up next for RGU, a trip to Dundee which was successfully navigated before welcoming St.Andrews to the north-east for the semi-finals. The fairytale continued for RGU, beating higher tier opposition again to book their spot in the final. Their opponents, the University of Stirling, who overcame UWS and Glasgow University on their road to the final.

In the men’s competition, there were more shocks and fairytale stories – this time for tier 5 side Edinburgh College. The only college side in the competition beat University opposition Heriot-Watt in round 1, before seeing off QMU in the quarter-final. Unfortunately, it was one step too far for Edinburgh College losing to tier 1 leaders, UWS, in the semi-finals.

On the other side of the draw, Aberdeen beat the Tayside teams Dundee and St. Andrews on their road to the final to set up a mouth-watering final with UWS.

Finals day arrived with the teams making their way to Dundee University for the first piece of silverware up for grabs in the BUCS Basketball calendar. A limited but excited spectator group provided some great atmosphere for the day and the Men were up first to fight for their National Championship.

UWS got off to a solid start, executing well on the defensive end to deal with Aberdeen’s 6’8” Scott Angus, holding the side to 17 first-quarter points whilst their offence was ticking along putting up 31 of their own behind some great shooting from US guard Javon Daniels. 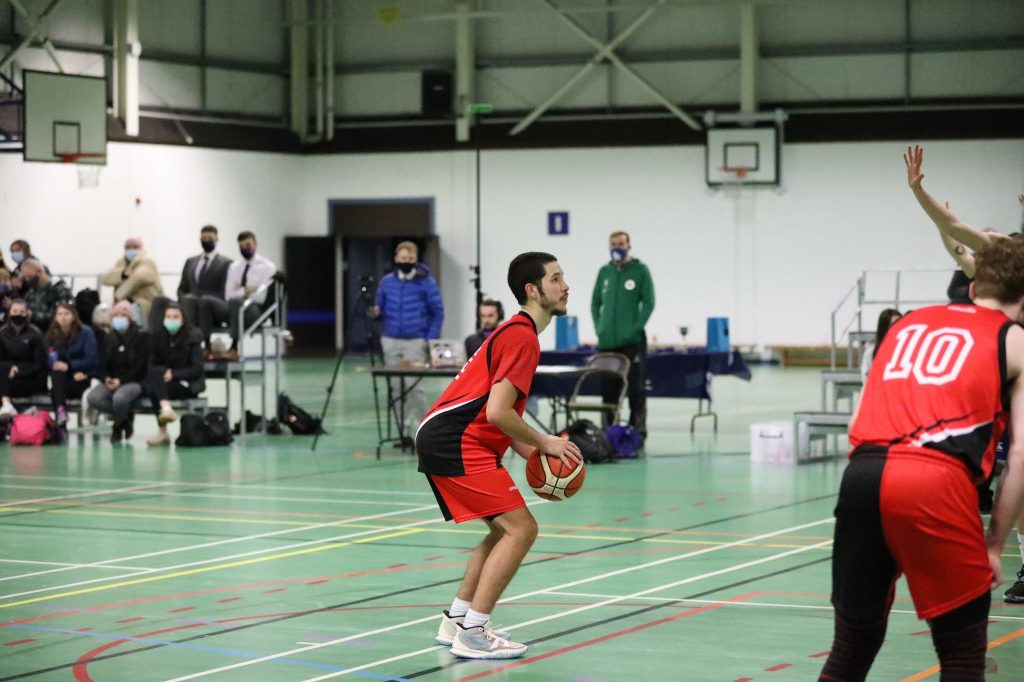 It would be a defensively focussed second quarter for both sides with the Paisley side struggling to deal with Aberdeen’s length, only mustering 11 points in the quarter. Aberdeen’s Nathan Cuthbert played a starring role for his side’s offence as Aberdeen trailed by 9 at the half, 42-33.

A halftime talk from UWS Head Coach Johnathan MacLeod would prove vital as his side put up their biggest quarter of the game, posting 33 points behind some lights out shooting from floor general Jaylen Franklin from behind the 3 and the free-throw line, whilst Daniels and Jack Thomson chipped in with a few big 3 pointers of their own. It would be a quarter to remember for the West but one to forget for Aberdeen as they struggled to keep up with the pace of UWS and couldn’t crack their defence as well as the first half, with the lead opening up to 75-51.

With the final quarter rolling around, UWS would just have to hold on to claim the first-ever National Championship. A team effort would be key as Jamie Orr and Fraser Black provided some key defence on the Aberdeen post play. Daniels and Franklin stayed hot with their shot as UWS ran out 90-75 winners behind an MVP Performance from Jaylen Franklin with 30 points personal.

After such a thriller, RGU and Stirling were up next and it was a slow start for both sides with the defence forcing plenty of turnovers early. Stirling eventually found their feet and opened up a 9 point lead before RGU fought back to end the quarter down 4.

A second-quarter of well-executed offence from Head Coach Amy Kirkhouse’s side saw Abby Rutter, Molly Waddel and Khera Ross lead the pack and put the pressure on as they showed their class and Tier 1 experience. Half time came and at the break, Stirling led 36-25. 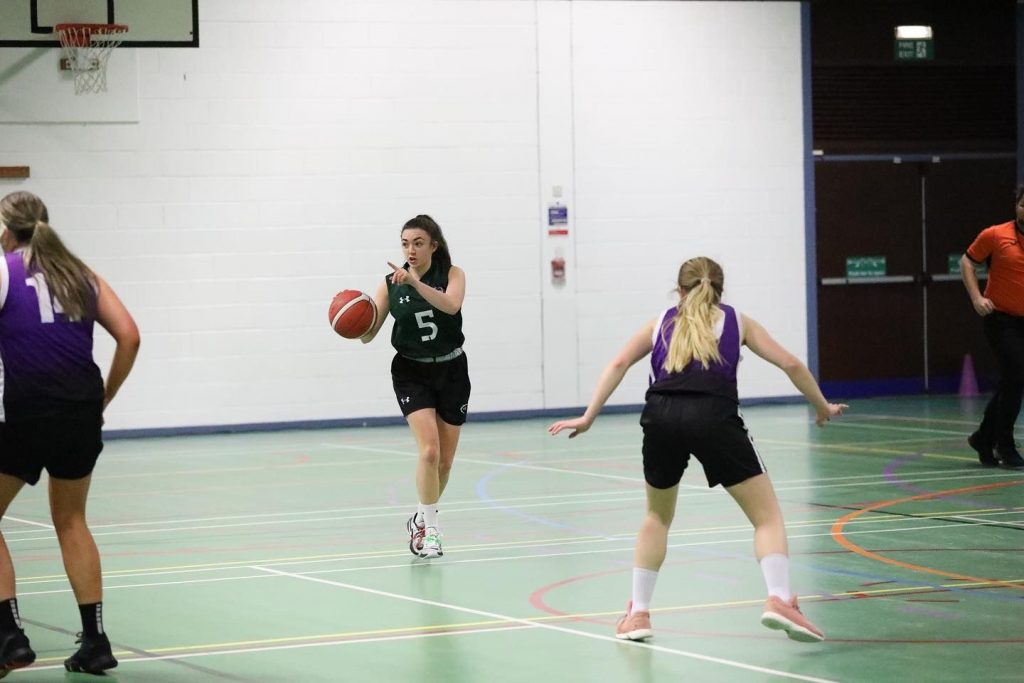 The turnover issues continued for Rory Anton’s side as ball pressure from Saoirse Allen and Davee Sang plucked up plenty of steals for Stirling as they began to pull away. Sarah Brady returned to action for RGU and made an immediate impact steadying the ship for her side and slowing the pace of the Stirling offence as the mission of chipping away at the 42-26 gap. A fantastic offensive run from Hannah Collins and Karly Fracalanza reduced the gap as RGU trailed 45-34 and we were set for a huge 4th quarter.

RGU hung in with Stirling and the gap went from 9 to 11 points with both teams trading baskets, before Stirling began to crack and the gap started to trim down the single digits. Massive 3’s that got the crowd on their feet from Fracalanza and suddenly we had a 1 possession game heading into the final minutes.

Some crucial stops on the defensive end and more big baskets from Fracalanza saw Stirling’s big lead cut to 1 point in the final minute. Some key misses from Allen on the free-throw kept RGU in with a chance, but a turnover and two big freethrows from Khera Ross on the return possession gave Stirling some breathing room. Clodagh Mullan returned to the freethrow line for RGU and cut the lead to two, which was followed by a steal for RGU and a last-second time out for Coach Anton, his side would have the final possession of the game. A nail-biting final second as the shot went up but just rattled out, saw Stirling University crowned the first-ever National Champions. Abby Rutter picked up the MVP performance with 23 points.

Thank you to all officials, volunteers and basketballscotland staff who helped make this event happen!