The Saints go marching in! Held at Oriam on Wednesday 20th April, the #SheCanSheWill Cup Final saw The University of St Andrews face off against The University of Stirling to claim the title of top women’s side among Scottish universities and colleges. The newly named cup (formerly called the ‘Womens’ Cup’) reflects the ongoing drive to progress women’s sport in Scotland and the number of supporters who took to the stands shows clearly that the women’s game is on the rise.

The first half went by in a flash as strong defence by both teams resulted in a halftime score of 0-0. Attempts came from Isabella Rosalina and Maddie Curtis of St Andrews. However, the Stirling defenders were on their game, led by goalkeeper Victoria Scarratt. This trend continued into the latter half as both teams moved the ball down the pitch, seeking opportunities and testing the defence. The first opportunity of the second half came for Stirling on a corner, but a header from Jodie Malcolm was saved by substitute goalkeeper, Mariel Gordon. St Andrews looked to threaten in the 56th minute with a shot to the bottom corner from Mary Dugan, however, a phenomenal diving save denied them once more.

The gripping back-and-forth continued, with both defences stifling any attempts to venture deep into opposing territory. The next close call came from St Andrews in the 65th minute as a save from Scarratt resulted in a corner, upon which the Saints nearly capitalised. The stellar goalkeeping continued as Scaratt once again deflected a shot from Rosalina. Stirling seemed to find more of a rhythm and pushed back with fighting spirit but at 90 minutes, the score remained 0-0.

Extra time began with Stirling driving down the pitch. The crowd held their breath but the shot at goal just went wide. The Saints looked to turn the tables quickly, and soon found their way into enemy territory. Taking advantage of a few mistakes by Stirling, St Andrews got a great opportunity with a corner but once more the crowd were denied the goal. St Andrews quickly got back on the offensive as Rosalina snuck in behind the defenders after a long pass from Gordon, which her sights on the goal. The shot was just knocked away by a sensational sliding tackle from Holly Watson and Stirling breathed a sigh of relief. The stalemate continued as the Stirling attackers found themselves unable to make ground. A shot from Malcolm just ricocheted off the post and extra time finished goalless

Penalties are no-one’s favourite, but the Cup Winners needed to be crowned. The first shot from Rebecca Hellgren (Stirling) went wide. St Andrews’ first was scored by  Clare O’Connor who guided the ball into the bottom left corner. Next from Stirling, the shot by Chenoa Rainer went just too high, aiming for the top corner. Daisy Beddall made it 2-0 for St Andrews as she drilled the ball past the keeper. Keeping Stirling in the game, Maria Rishina sent the keeper the wrong way for an easy goal. Next for Saints, Isabella Rosalina hooked the ball to the left which kept the score 2-1. Lindsey Blues stepped up for Stirling and despite the pressure building, she delivered a neat goal to the bottom left corner to tie the score. St Andrews’ managed to retake the lead after a goal from Natalie Chandler hit off the hand of Scarratt and went in. Barely a sound could be heard in the stadium as, Jackie Malcolm took her shot for Stirling. Her attempt was denied by goalkeeper Gordon causing the St Andrews bench to empty as they stormed the pitch to celebrate. University of St Andrews won the #SheCanSheWill Cup 3-2 in a nailbiting penalty shootout! 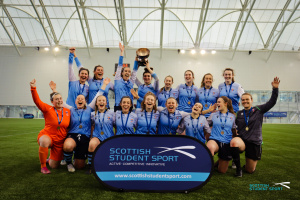 Congratulations to the University of St Andrews and Player of the Match, Isabella Rosalina of St Andrews. They received their silverware from Jen Malone (South East Regional Manager from the SFA) to rapturous applause from the stand. Thank you to Oriam for hosting the event and to our match officials.

Live streaming was provided by Youth Football Scotland and a full replay of the match can be seen here.

A full album of photographs can be seen here.