Value of Stirling hits new high ahead of derby final 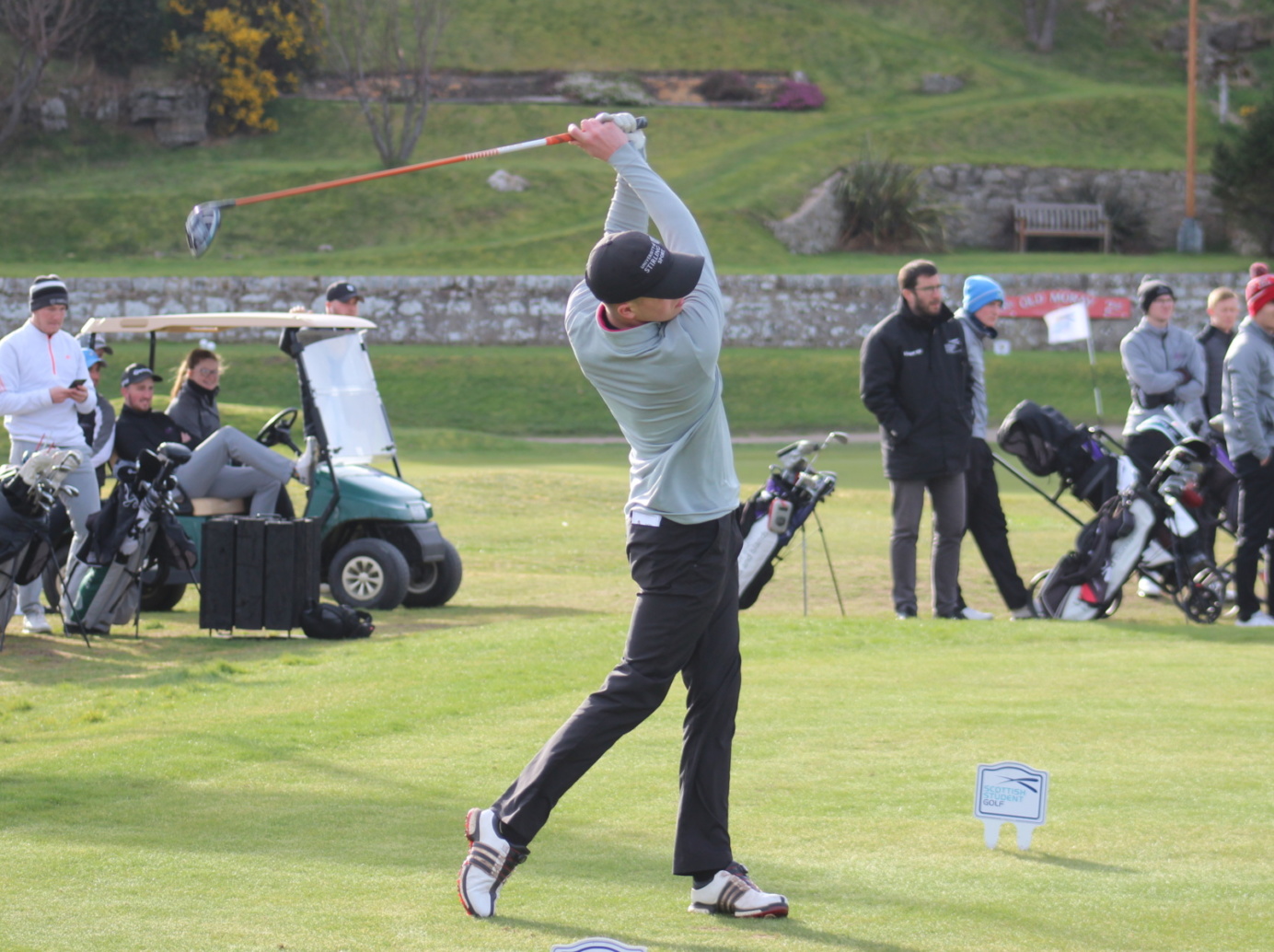 Top seeds Stirling I sought to capitalise on their extra day’s rest when they faced off against a Strathclyde side that showed a real flair for matchplay in defeating Stirling III in the Quarter Final. Meanwhile Stirling II prepared to face ‘local’ favourites UHI in what promised to be a tantalising encounter.

The Strathclyde lads set out at a healthy pace with the aim of building a morning lead over the four foursomes matches. Three of the matches ‘turned maroon’ in the opening holes, and with the exception of match three it was nip and tuck well into the back nine. Stirling’s lead pair of Edgar and Napier had to rely on good up-and-downs on three consecutive holes from the 10th to get ahead and they had to trade birdies on the way in to come out on top by a margin of 2 holes.

Lawrie and De Wouters timed things well and saved their best golf for the last six holes, accelerating from a position of 1 down thru 12 to turn things in their favour and finish with a two-hole victory.

Strathclyde rallied in match three, with Martin Friel and Rory Asher who got ahead early on and never looked back, compiling a resounding 7&5 victory over Oliver Bailey and Jordan Sundborg.

In the final match of the morning, Alasdair McDougall and Harvey Talarczyk made a positive late run to eventually overcome the stiff resistance of Greg Andrews and Jack Williams by 3&1.

Further back on the course a mixed morning match was developing between UHI and Stirling II, with the overall score providing a sense of balance that was sometimes missing from each foursomes tie.

Scott Macpherson and Matt Bell got ahead early against Kieran McCormick and Michael Schinkel and never really looked back, eventually winning by two holes but without ever really looking in too much trouble.

Meanwhile it was quite the opposite picture in match two, with Euan Ferguson & John Oster racing away to a commanding position after six holes and maintaining a dominant position to ultimately defeat Matthew Fitzsimons & James Kempster by 5&4.

It was similarly emphatic for Riccardo Cellerino & Lewis Johnson who comfortably took care of Daniel Morris & Ashley Bendall by 6&5, but when Lewis Black and Shasa Decker ground out a close victory over Alistair MacNaughton and Graham Minton it left things very finely poised at lunchtime.

The afternoon singles matches got underway in bright but gusty conditions over the fairways of the New course – and from an early stage a familiar pattern of Stirling dominance started to appear.

Reigning champions Stirling I clearly felt that only their best golf would do and set about painting the scoreboard green with a sense of genuine purpose.

Robert Foley led the charge very capably and would ultimately triumph over Allan Woodhouse by 3&1.

Jean De Wouters held his nerve to prevail over the ever-competitive Martin Friel, winning on the 18th green by the closest of margins.

The overall result was secured when Michael Lawrie powered to a really impressive 6&5 win over Jack Williams in match 4.

The third match was perhaps the pick of the ties, with Captain Colin Edgar needing to hang tough in order to share the spoils with Nairn native Rory Asher.

Oliver Bailey, Alasdair McDougall, Mark Napier and Jordan Sundborg added their own points to the growing tally and combined to seal an emphatic win for the champions with a final score of 10.5 to 1.5.

In the second semi-final the UHI team struggled to build any momentum in the afternoon and will have felt that things just weren’t quite going their way.

Kieran McCormick struggled to find his stride against Matthew Bell and the Stirling player maintained a relentless pace throughout the match, coming out on top by 8&7 in what will have given his team-mates a real boost.

Matches two and three were never more than a hole or two in anyone’s favour and indeed they would each end in a half, with Schinkel and Macpherson swapping blows all the way round, and Towers and Black unable to outdo one another.

There was a second wave of green on the board though, when first Kempster, then Bendall, Morris and Decker each all weighed in with a treasured point.

Riccardo Cellerino showed great spirit and pride to add some UHI punctuation to the end of the story, playing some fine stuff on the way to a two hole win over Matt Fitzsimons.

All of that results in an all-Stirling final tomorrow as the 1s will take on the 2s from 0800. For full lineups and live score updates please visit GolfBox