All eyes were on the Scottish Student Women’s Cricket National Squad as they played their first-ever SSS representative match! Find out how the girls got on! 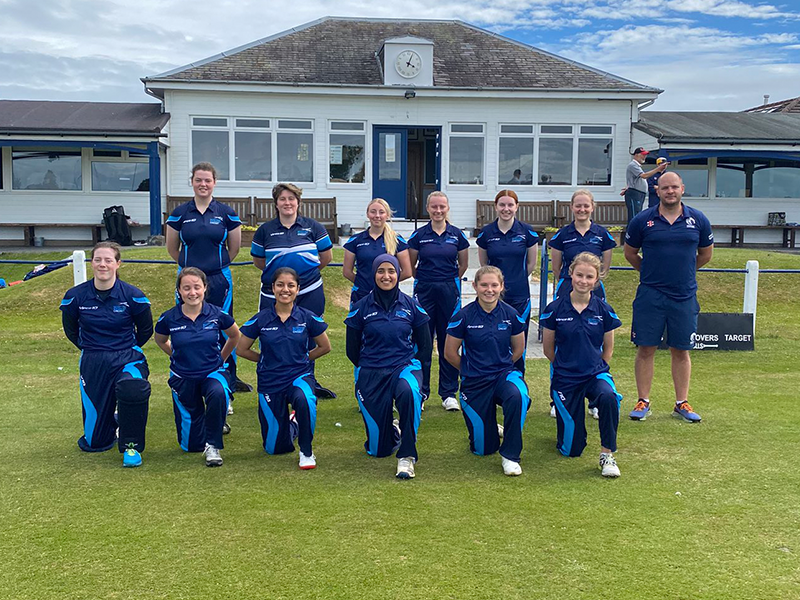 The SSS Women’s Cricket National Squad marked their first match of the season with a win!

Captain for the day, Abtaha Maqsood (University of Glasgow) won the toss and sent the Cricket Scotland  Performance squad into bat first.

Scotland international Megan McColl (Napier University) opened the bowling for the SSS select team and got the girls off to a dream start with a wicket in her first over. This set the tone for a match-winning performance from Megan who picked up another wicket in her opening spell. Abtaha Maqsood replaced  Megan, and continued where her fellow Scotland international left-off – picking up 3 wickets for 14 runs in her 5 overs. Phoebe Beal (University of Edinburgh) and Emily Mackenzie (University of Dundee) both chipped in with one wicket each before Megan McColl came back on to take a further 3 wickets – finishing with bowling figures of 5 wickets for 32 runs off 6 overs. A solid bowling and fielding performance from the students meant the CS Performance Academy were all out for 128.

With the match being 40 overs aside, the girls knew there was plenty of time to chase down the score and that patience would be key. After losing two wickets early on, the students had to stick in to stem the flow of wickets and keep themselves in the game. Some strong hitting and a solid 70 run fourth-wicket partnership from McColl and Maqsood got the girls out of trouble before Maqsood was out for a well-earned 35. Pheobe Beal joined Megan at the crease and the pair saw the girls home to a six-wicket win with 17 overs to spare.

Well done to both teams for a great game of cricket and shoutout to player of the match Megan McColl for her performance with both the bat and ball – scoring 42 runs (not out) and taking 5 wickets!

Huge thanks to Arbroath Cricket Club for hosting the match and two Cricket Scotland for providing a competitive opposition! Most importantly it was fantastic to see women’s cricket return to the SSS National Squad programme, further highlighting the success and development of the women’s game in Scotland. Here’s too many more Scottish Student Women’s Cricket matches in the near future.

It’s been a long time coming but it’s finally arrived, the first ever SSS women’s national squad has its game against @CricketScoPLUS @CricketScotland women’s PA at the lovely @Cricketarbroath! Good luck to all those involved! pic.twitter.com/tGofEQ6Wtv