On the 5th November, the Scottish Student Cross Country Championships took place at the Garscube Sport Complex in Glasgow, kindly organised and hosted by the University of Glasgow. 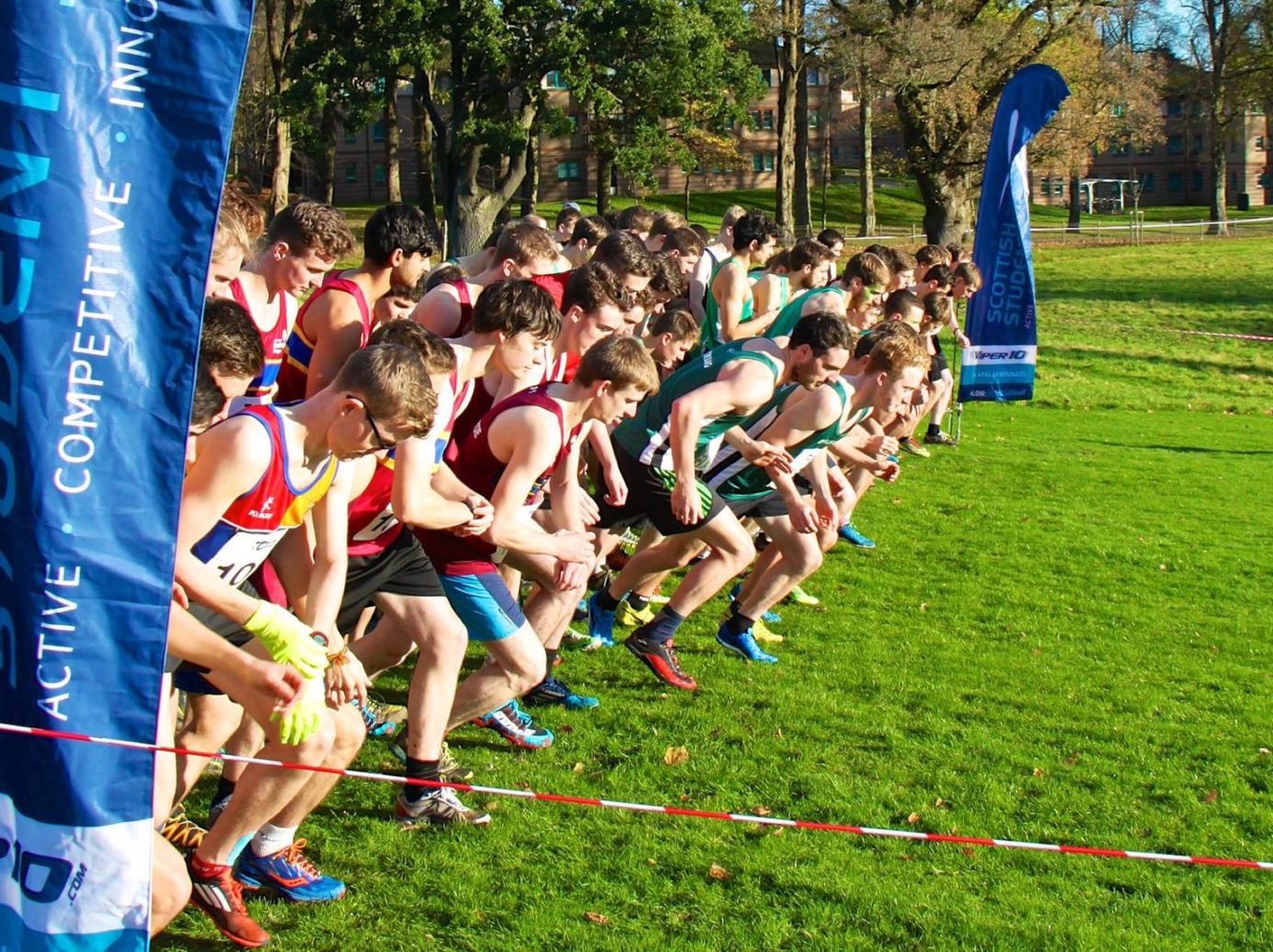 The course included a nice variety of wooded trails, open fields and sharp ascents, with some extremely boggy patches thrown in for good measure. The day brought bright, crisp, and still autumnal conditions, perfect for a good day of cross-country running! There were 175 entrants from 16 institutions in total, demonstrating that the sport of cross-country is alive and well within student sport! Aside from the SSS title, places at the Inter-District XC in Holyrood on the 13th January were also at stake, with the top 8 in both races guaranteed places in the race as part of the SSS squad.

The women’s race was off at 11:00am prompt, and consisted of a small lap, two large laps and the finish straight to make up around 6km of muddy XC goodness for the athletes to contend with. From the gun, a group of early leaders was soon established in a highly competitive field.  Team mates Beth Hanson and Laura Stark (Edinburgh) began to turn the screw on the hillier sections of the course, both putting their hill-running credentials to full use, and broke clear from the rest of the leading group going into the 2nd lap. They were closely pursued by Zoe Bates (Aberdeen), Amy Frankland (Edinburgh), Katie Bristow (UWS), Sophie Collins (Edinburgh) and Becky Storrie (Stirling), who chopped and changed positions throughout the race. It was hotly contested between the two leaders, however on the final descent and stretch along the river Kelvin, Laura Stark managed to break clear from Beth Hanson to claim the victory and her first Scottish Student Sport title, a remarkable achievement for a 1st Year athlete! Zoe Bates managed to shake-off the other chasers to finish strongly and complete the podium in 3rd.

What a weekend! Absolute privilege to be able to host the SSS cross country championships and be able to showcase the phenomenal facilites the University of Glasgow has to offer. Incredibly proud of Sol Sweeney for winning the men’s race, as well as the men’s team for bringing home the silver team medal (Sol Sweeney, Ross Gollan, Gavyn Chalmers, Tristan Rees). Special mention to Katrina Ballantyne for a solid top 20 finish in the women’s race. Massive thanks to all the time keepers, officials, marshals and @scotstusport for making it possible! @glasgowunisport @gusapresident @uofglasgow #scotstusport #scotsunisxc #blackandgold #gusaresults #runeveryday #SSSXC

A strong finish from Amy Frankland in 4th secured the women’s team title for The University of Edinburgh with a very low score of 7. The University of Aberdeen also packed extremely well, with Hannah Addison (8th) and Caitlin Arnott (14th) adding to Zoe Bates’ 3rd place to take 2nd place team overall on 25 points. The University of Stirling team completed the team podium thanks to the efforts of Becky Storrie (7th), Lauren McCulloch (10th) and Eilidh MacCorquodale (29th).

With the course now suitably churned up, the Men’s race was off. Two distinct leading groups developed from 2km into the race, headed by a group of 10 who were hotly pursued by 7 chasers, with a good mix of different teams amongst the high placings. With the undulating course taking its toll on some, the lead group of 10 them became 3 going into the final lap, headed by Michael Ferguson (Aberdeen), Sol Sweeney (Glasgow) and Sasha Chepelin (Edinburgh). Behind the leaders, it was still very much all to play for the team competition, with no team clear cut to take the title!

There were 143 finishers in total this year, a 19% increase upon last year and yet another indicator of the growing popularity of our sport.

A massive thank you to the University of Glasgow for hosting an extremely successful event, the scottishathletics officials for time-keeping, the ambulance service for being on hand to help with any medical issues, the marshals for their help and encouragement on the day, and all those who turned out to support the event, be you spectators or athletes!