After a hiatus due to Covid-19, the Scottish Student Triathlon Championships returned as part of the East Fife Triathlon Club’s Annual Triathlon, held at Cupar Sports Centre on Sunday 10th April. After a hiatus due to Covid-19, the Scottish Student Triathlon Championships returned as part of the East Fife Triathlon Club’s Annual Triathlon, held at Cupar Sports Centre on Sunday 10th April.

It’s worth noting that this was the highest number of student participants recorded since the event started being run as part of the EFT Annual Triathlon in 2017! In addition to the clubs, teams from the Universities of Edinburgh, Glasgow, Dundee, St Andrews, Stirling, Strathclyde and Aberdeen as well as Robert Gordon University were in attendance. This is a massive achievement for the only Scottish Student Triathlon event able to run all year!

The event had an excellent atmosphere due to all the supporters and family members who came to spectate. Many crowded the barriers around the transition area offering encouragement to the athletes as they rushed to mount their bikes and set off down the track. As the cyclists trickled away from the venue and out into the rural hills of Cupar, they were all smiles. Whilst the latter half of the competitors were setting off, the first groups started to appear back at transition.

After the cycling came the running, as the athletes quickly dropped their bikes and were directed out to the track behind the sports centre. The first stretch of the run went through a scenic, wooded path, before coming out at the sports field. Competitors then had to make several laps before coming around the corner to the finish line. This was set out in front of the stands so all the supporters could cheer on the athletes rounding the final bend.

Shortly after the final competitor crossed the finish line all participants gathered in the club house for the medal ceremony.

Many thanks to East Fife Triathlon Club and the volunteers from Scottish Student Triathlon Chair for organising the event. 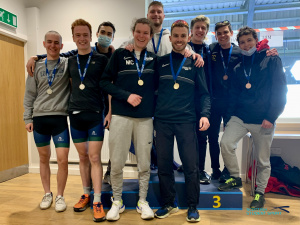 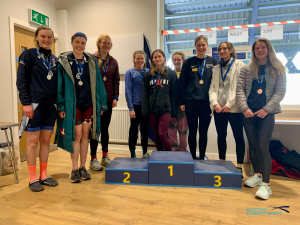