Doesn’t it make you proud to be Scottish?

We are proud to be part of a wider community helping Scotland increase overall health through playing sport! 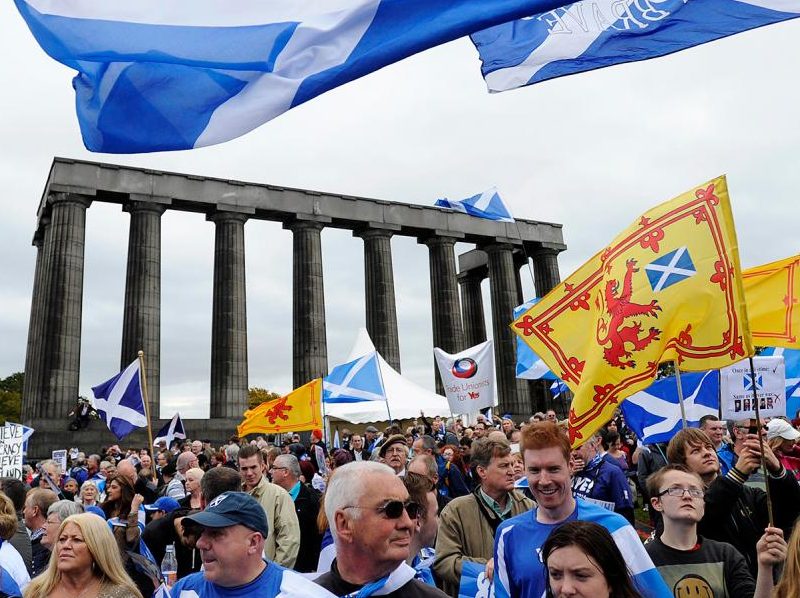 We are proud to be part of a wider community helping Scotland increase overall health through playing sport!
‘Sport for change’ is defined as ‘using sport and physical activity intentionally to bring about positive benefits for individuals and communities, to address specific needs.’
The Sport for change report highlights the role that sports and physical activities can have in bringing about positive changes for individuals and communities in Scotland,
Have a quick read through the Summary here; http://bit.ly/2r8DNCK

Scottish Student Sport are delighted to announce the opening keynote speaker for our 2017 conference as Ed Smith. 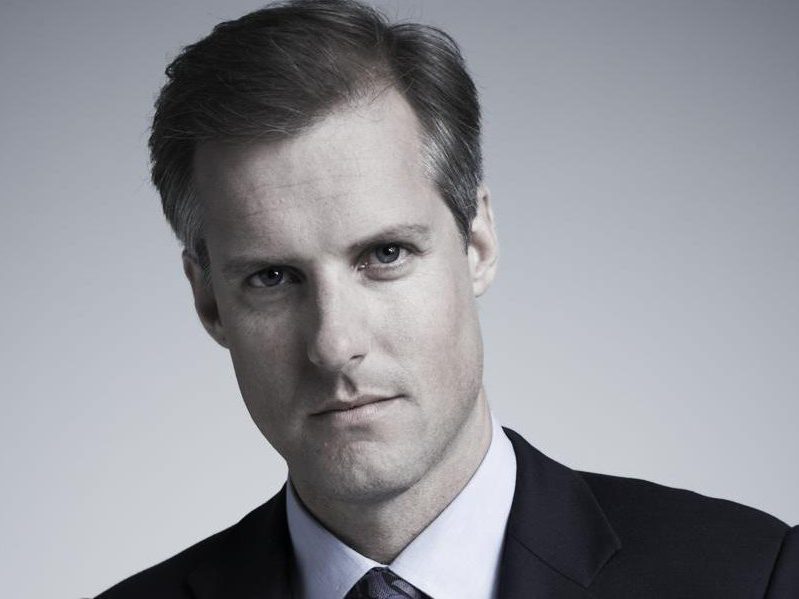 Scottish Student Sport are delighted to announce the opening keynote speaker for our 2017 conference as Ed Smith.  After his talent with a cricket bat was spotted at Cambridge, Ed signed for his home county. In just one month with Kent he scored six centuries – including an innings of 203. He went on to captain Middlesex and represent England, becoming a popular and highly respected figure.

When an ankle injury forced his retirement from the first class game Ed replaced bat with pen, following in the footsteps of his novelist father Jonathan. While living for a year in New York he wrote Playing Hard Ball, comparing cricket and baseball and their relationship with national myth and identity. He followed this with On and Off the Field and What Sport Tells Us About Life – an exploration of the role of sport, its psychological and cultural effects and the moral lessons it teaches us.

Ed wrote the weekly MindGames column in the Daily Telegraph, and is now a features writer on The Times covering anything from education to ‘Renaissance Man.’ He has also presented a series on Peak Performance for Radio 3 and an episode for the BBC’s Inside Sport.

Ed talks about promoting change by winning over the waverers, rather than wasting too much time on intransigent opponents. He also encourages an inquisitive attitude, to ensure continual improvement. “Good teams have to stay light on their feet, always adapting.

You can’t afford a mindset of ‘we’ve got this dead right, all we have to do is repeat what we’re doing forever.’

“I really it enjoyed it, the competition today was really good! Coming out of the pool they were lots of people ahead and on the bike as well, there was some really strong bikes out there. I managed to have a good race overall so I am very happy.” 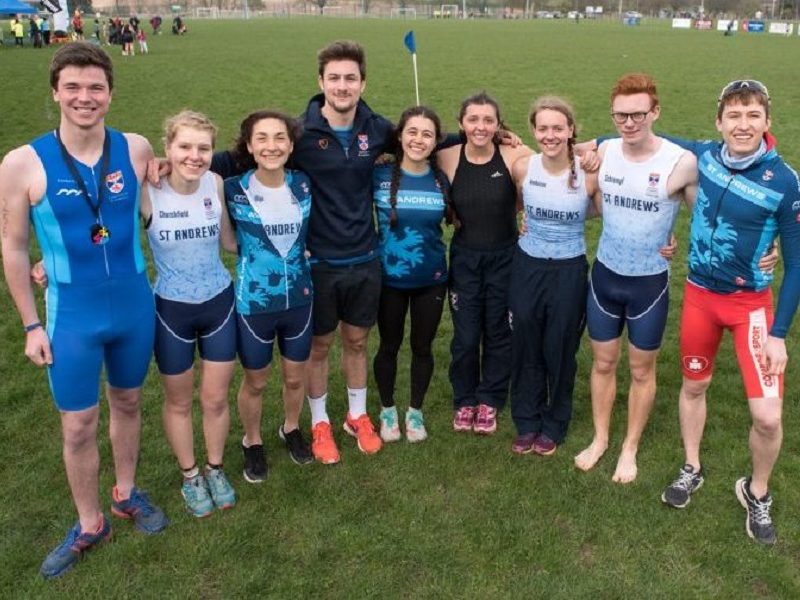 **This story is not our original content.  It was originally posted by Triathlon Scotland & written by  Lesley J;  http://www.triathlonscotland.org/2017-scottish-national-student-championships/

The National Student Championships was hosted by East Fife Triathlon and ran in parallel with the annual East Fife Triathlon event. With a new event organising team, and a slightly modified race route, eager participants arrived early to recce the site and become familiar with the course.

With a lovely still morning it remained dry for the duration with a fair headwind for competitors to battle, throughout the day. The fastest sprint wave set off first and Kristof Anheuer (St Andrew’s University) was first out the pool, followed by Edinburgh University’s Rian Cook and Luca Fanottoli of Stirling University. Out on the 24km bike section Paul Kerr (Edinburgh University) had a great ride, recording the fastest split of the day with 36:10.  However, it was Nicolas Allen (Edinburgh University) and Kristof Anheuer (St Andrews) vying for that Championship title.  Out on the run, which ends with an energy sapping grassy section, Nicholas Allen had an incredible effort (15:42) to see him take the Championship title with Kristof Anheuer and Paul Kerr taking second and third respectively.

Catching up with the winners after the race, Nicolas commented:  “I really it enjoyed it, the competition today was really good!  Coming out of the pool they were lots of people ahead and on the bike as well, there was some really strong bikes out there.   I managed to have a good race overall so I am very happy.”

Phoebe added:  “I really enjoyed the race, even though the swim got off to a bad start but I was able to build up on the bike and the run.  It was my first year doing this race, and it was really interesting to try something new.  The head winds did pick up a little bit but it was enjoyable.  The run was beautiful, running through the country lanes.”

We caught up with winners after the race, and you can watch our interview and view our race photos on our Facebook.com/scottishtri page.

The Championships had a great atmosphere with lots of support from the university clubs. It was fantastic to see 46 competitors from nine universities turning up to race at the event – representing just how much university triathlon has grown.

With something for everyone the East Fife Triathlon also played host to an open sprint, novice and a TriStar aquathlon as well.  The open sprint race and the student races were combined with participants set off in waves according to the 750m swim time submitted on entry.  In the men’s race Craig Dale (HBC Jets) had a good swim providing him with a solid start to the race.  A good bike section and steady run saw him cross the line first in 1:05:11.  Both Luca Fanottoli (1:05:12) and Nicholas Allen (1:05:47) were rewarded again for their performances with second and third respectively.  In the female race, Natalie Milne was the clear winner leading from gun to tape, finishing in 1:10:38.  Stirling University’s Aoife Fay and Phoebe Lloyd-Evans also made the podium with their 1:15:47 and 1:19:29 finish times.

The novice event saw lots of entries, with many universities represented here also.  Well done to Findlay Baillie (unattached) and Natalie Curran (unattached) for their first place finishes.  New to the event the TriStar aquathlon saw over 70 youngsters from TriStar Start to TriStar 3 taking part.  Well done to everyone that raced on the day!  Results can be found here.

Scottish Student Sport are delighted to confirm that our Conference Accommodation will be at the impressive Dalmahoy Hotel & Country Club. 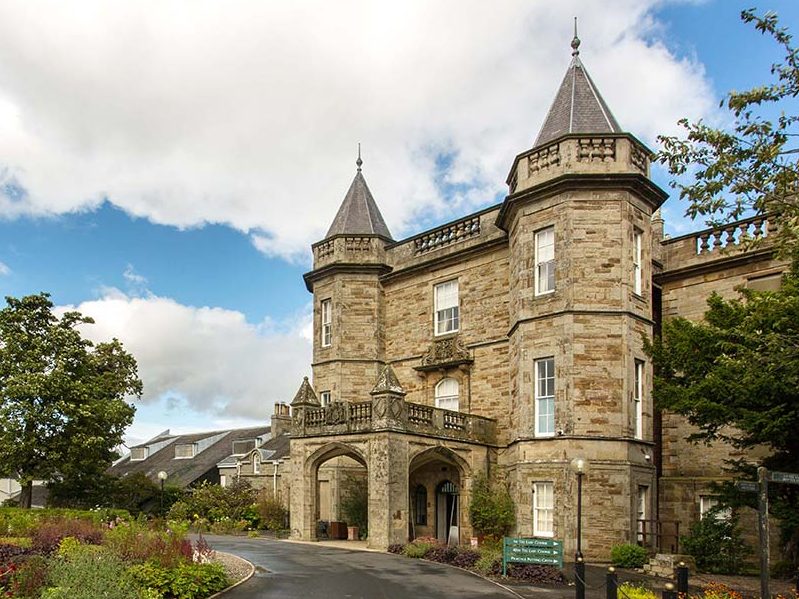 Scottish Student Sport are delighted to confirm that our Conference Accommodation will be at the impressive Dalmahoy Hotel & Country Club. They have over 300 years of history, just 7 miles from Edinburgh’s city centre.

Impressively situated in 1,000 acres of parkland lies the four-star Dalmahoy Hotel & Country Club. With spectacular views to Edinburgh Castle and the Forth Bridges, it’s a celebration of Scottish heritage.

With 215 rooms and suites, contemporary meeting and events spaces and a range of restaurants and bars, our historic resort also features two 18-hole golf courses, luxurious leisure facilities and a state-of-the-art fitness centre.

We will be offering our guests a range of rooms, and we will also host our awards dinner in the private dining suites of the Dalmahoy.  We hope you can join us on the 13th and 14th of June.

Teed Off at Plastic is proud to have gifted biodegradable golf tees in an eco-friendly bag to the students competing in this week’s Scottish Student Golf Championships (Moray GC, Lossiemouth).

We’re delighted to be partnering with Teed Off at Plastic in Lossiemouth this week to bring attention to the unsustainability of plastic tees in golf. Each player has been given a bag of biodegradable tees and we are looking forward to working to change attitudes in golf.

Teed off at Plastic wrote;

‘Having become aware of issues with plastic golf tees ending up on local beaches, our friends at Scottish Student Golf have teamed up with Teed Off At Plastic to promote widespread environmental awareness.

Teed Off at Plastic is proud to have gifted biodegradable golf tees in an eco-friendly bag to the students competing in this week’s Scottish Student Golf Championships (Moray GC, Lossiemouth).

We are delighted by Scottish Student Golf’s proactive approach, which will spread awareness and encourage more eco-friendly choices when playing golf. It is great to know that the competitors will return to Colleges and Universities across Scotland with a positive message of change. Thank you to Scottish Student Golf for taking the initiative and for caring enough to back our campaign.

Scottish Student Golf is part of Scottish Student Sport – the national network for College and University sport. If you’re unaware of what this great organisation does for young people in sport and physical activity then please support them by checking them out online.’